Cats can continue to sleep peacefully following reports that Killer shrimp (Dikerogammarus villosus) were responsible for blinding a pet cat in Shropshire have been found to be wide of the mark.

Concerned cat lover Betty Evans feared that the erroneously named amphipods were the likely culprits after her much loved moggy Blossom's eyes went bloodshot, subsequent to sipping from her pond.

Blossom was rushed to the vets but despite operating they were unable to save her eyesight.

Betty was worried that the killer crustaceans had found their way into her water feature after local children offered to collect some aquatic critters to populate the pool from a nearby stream. 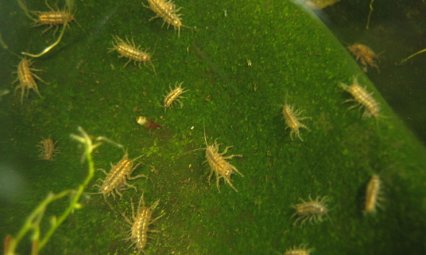 Investigations by Environment Agency (E.A.) specialists into the suspicious 'shrimps' captured in the pond showed that Betty's pond life identification skills were lousy as the potential culprits were discovered to be Asellus aquaticus (pictured above), commonly known as the Hoglouse which are harmless aquatic equivalents to woodlice. 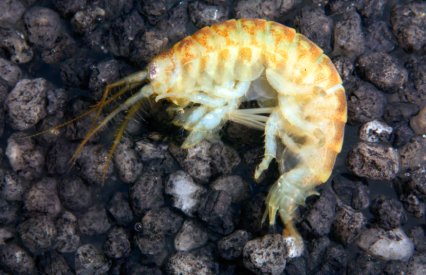 Dikerogammarus villosus (pictured above) is certainly a voracious and invasive predator which is spreading rapidly throughout Europe, killing off native amphipod species as well as fish fry and other small aquatic creatures and has just been named by the E.A. as number one in their top ten of 'alien invader' species in the UK. But at around 30mm/1.2" in length it is unlikely to try its luck with thirsty cats.

The true cause of the unfortunate feline's blindness is still unknown.