Keeping goldfish and birds - together! A Parisian designer has come up a bird cage and an aquarium, all in one.

The design called 'Duplex' is a new version of a design that the artist came up with in 2007 when the fish was in what equates to a giant cup on top of the bird cage.

The new, improved version now has a fish bowl that is moulded so that the fish can swim round where the area where the bird perches. 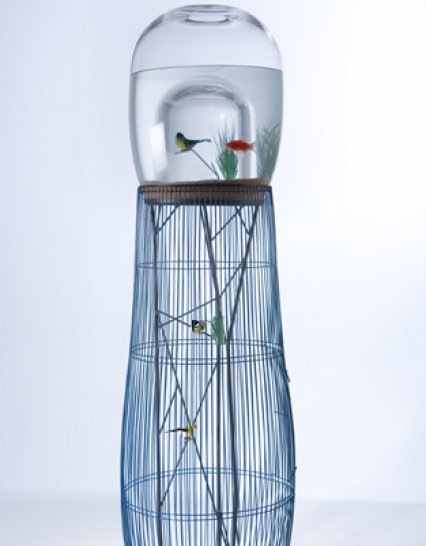 The designer says on her website: "Duplex is an aquarium/cage favouring an improbable encounter between a bird and a fish. The aquarium is thermoformed so as to create a space where the bird can fly at the same visual level as the fish. A surprising encounter that evokes the impossible fusion between the air and the waterworld."

The fish bowl has no pump or filter as it is 'an artistic project'.

The exhibitors told PFK. "We often use it with real fishes and birds during our exhibitions and fairs and it works well.

"There aren’t any filters or pumps associated with the aquarium. We use some oxygen tablets and we replace a third of the water every three days with by using a flexible pipe. For longer use, you can add a pump. There are some specific aquatic plants you can also add if necessary."