Kayak fisherman pulled out to sea by shark A man fishing from his kayak off the Devon coast got an unexpected free ride out to sea, thanks to a 1.8m/6' Tope (Galeorhinus galeus).

Holsworthy vet Rupert Kirkwood, a keen kayaker and conservationist, was towed about half a mile in his 4.8m/16' boat by the powerful fish before he eventually brought the shark onboard where he took some photographs before releasing it back into the water.

He estimated the fish weighed in at around 25kg/65lb. 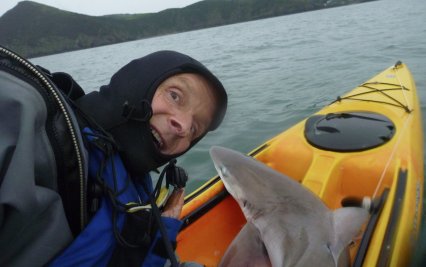 He had been fishing for over four hours without catching anything and had only stayed out due to the presence of a passing pod of porpoise when the shark took his mackerel bait. Mr. Kirkwood regularly fishes from his kayak and had caught his first ever Tope the previous week but it was considerably smaller than this one.

Tope, sometimes known as School shark, are members of the Triakidae or Hound-shark family and are a widely distributed species, found in many of the world's temperate seas and oceans, typically at depths of between 10 and 450m.

They feed mainly on bottom dwelling fish species such as plaice, sole and dragonets, as well as crabs and other crustaceans.

Tope are long lived with some specimens reportedly over 55 years old and are ovoviviparous, meaning the young grow in eggs inside the mother's body without a placental connection before being born.

Galaeorhinus galeus grow to a maximum of around 2m/6'6" and is listed as 'vulnerable' on the IUCN Red List for threatened species.