A fossil that was classified as a species of lemur has been discovered to be that of a fish.

The one-of-a-kind fossil was discovered by a collector named Pedro Scalabrini over a century ago and is thought be between 6 and 9 million years old. He sent it to Argentine expert Florentino Ameghino who classified it as Lemuridae and named it Arrhinolemur scalabrinii — which translates as "Scalabrini's lemur without a nose."

Over the years, scientists have cast doubts over Ameghino's classification of the fossil, and now it has been confirmed that it's a fish of the Anostomidae family. It's a Leoprinus, apparently of an now-extinct species.

The study was undertaken by Brian Sidlauskas, an assistant professor of fisheries at Oregon State University, and Smithsonian ichthyologist Richard Vari. The team reported their findings in the journal Neotropical Ichthyology. Picture below by Brian Sidlauskas. 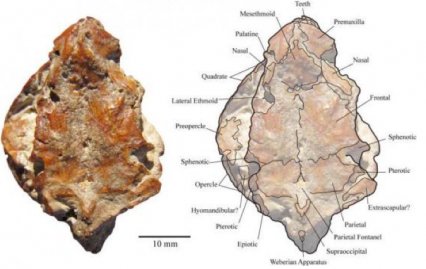