When it comes to bottom dwellers that earn their keep, you could do a lot worse than some of the sea stars, writes Tim Smith.

The echinoderms aren’t given as much credit as they deserve, at least not in proportion to their diversity. They’re this bizarre, unique group of creatures that are often inadequately thought of as simple marine invertebrates relegated to the ocean floor. But their numbers and roles in any given marine ecosystem can be staggering.

In the marine aquarium world, too, their importance is often overlooked. In most instances they’re assigned some lesser role: clean-up crew, hitchhiker, nuisance. However, given a closer look and a new appreciation, these animals can become the stars of a marine tank, and challenges for the aspiring marine aquarist looking to broaden their horizons.

To put it very simply, the echinoderms are made up of the sea stars, brittle stars, sea cucumbers, sea urchins, and feather stars. These are neat categories, but it says little for the diversity represented by some 7000 species contained within.

Even among these groups are a range of lifestyles and ecologies that reflect the absurd numbers of niches that these animals can fill. From tropical to temperate waters, reefs to deep sea, you’ll be hard pressed to find a marine environment without some form of echinoderm.

The group as a whole share a number of common traits, but the defining characteristic is their five-fold symmetry. While most animals (such as fishes and ourselves) can be split in two parts equally, echinoderms cannot; equal portions can only be achieved when splitting them five ways. It’s the reason that (most) sea stars are five-armed, or why urchin shells have five segments. Some very unique species are arranged in multiples of fives.

They also all have tube feet. These line the echinoderm exterior and facilitate all manner of important functions from feeding to locomotion to camouflage. These can be obviously seen in many species, but are a lot more subtle among others such as feather stars and some sea cucumbers. Other times they’re greatly modified, as in the huge feeding appendages of the sea cucumbers. 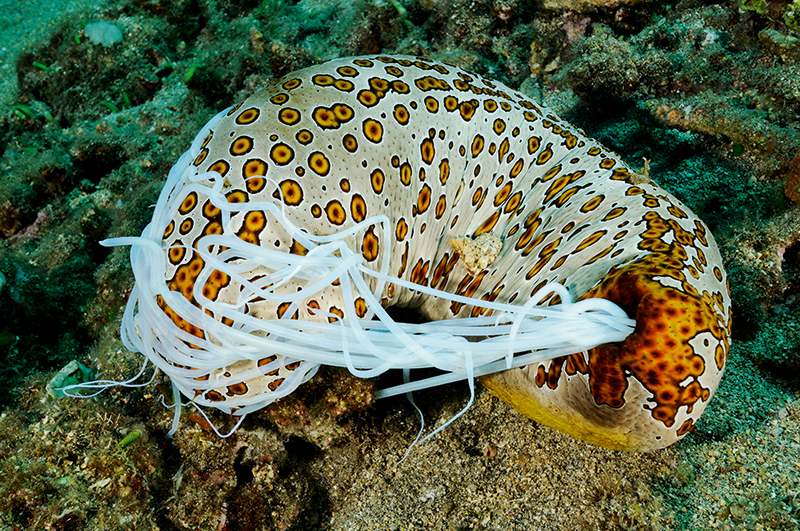 When talking about marine clean-up crews (CUC), the echinoderms regularly make the roster. For good reason too: few species are problematic or predatory, and most can be classed as remarkably unobtrusive.

Being benthic, they regularly find themselves in the right spot; which is to say, where excess foods and other organics settle out. Some echinoderms are particularly suited to sifting through the substrate, and are effective processors of all manner of organic waste and microorganisms nestled within the sea floor — in theory, making them great for the home aquarium.

The danger in regarding animals as a clean-up crew is that their specific needs are rarely met, relying on chance and fate that enough food makes its way into their realm. An animal in diminishing condition will lose size, and a warning sign of this is increased activity during daytime, as they desperately search for extra morsels.

Like other marine invertebrates they are sensitive to their environment, and their living conditions must be maintained at a high standard. Deteriorating water quality is the final straw for these animals; that echinoderms are so affected may only become apparent long after the fact, owing to their fairly inactive and inexpressive nature.

Of particular importance are strict maintenance of low nitrates and stable, full-strength salinity, deviations from which can prove harmful even in the short-term.

There’s nothing wrong with allowing animals in your aquarium to take on the role of a CUC, but at the same time it is very important to monitor that they’re getting food, remaining in good health, and that particular requirements of each species is addressed, be that dietary or environmental. 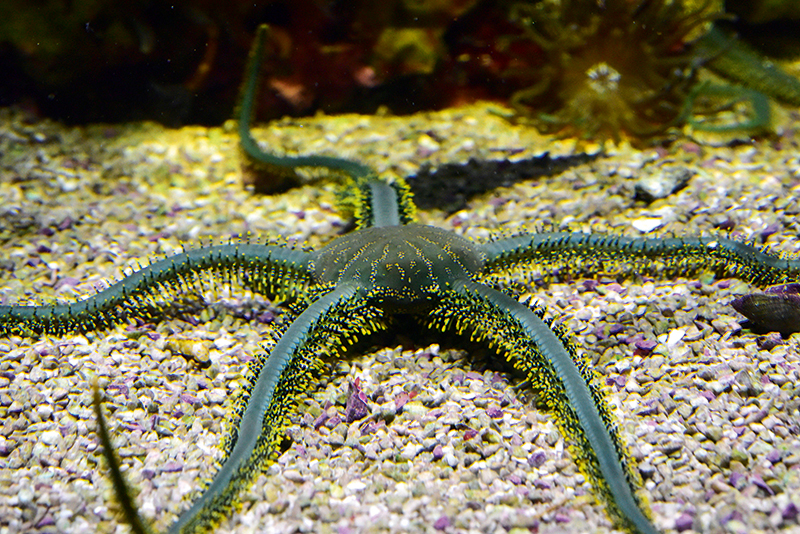 The popular kids among the echinoderms, the sea stars (note: we don’t call them starfishes anymore) are iconic marine animals that make the wish lists of aquarists the world over. Often sporting lovely colours, patterns, and textures, only a few species are really suited for the long-term in aquaria, but those that are make stunning additions.

The dietary requirements of sea stars are about as varied as their colour patterns. Usually carnivorous, each species may ‘hunt’ a particular type of prey that doesn’t move very fast: corals, sponges, molluscs, or even other echinoderms. A couple of species graze on algae and other surface-growing life. Generally, though, one should be wary of mixing sea stars with other sessile invertebrates.

Some species, although having dietary preferences, will scavenge on detritus and other sea floor goodies wherever available.