Howard the hermit shells out for glass house A hermit crab called Howard on display at the National Sea Life Centre in Birmingham has taken up residence in a smart new glass shell.

Howard, a White spotted hermit crab (Dardanus megistos) was offered the specially crafted shell as his new abode by aquarium staff when his more traditional whelk shell became too small.

After a quick inspection of the potential new pad, he quickly took up residence and now visitors to the aquarium can get a unique view of the hidden home life of hermit crabs. 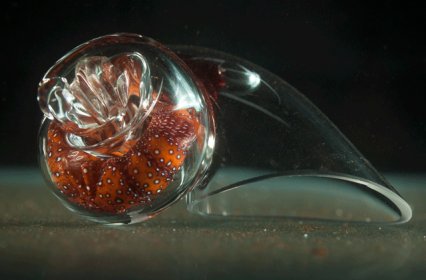 The aquarium has had a selection of other larger glass shells made at the same time so when it's time for Howard to move up the property ladder, his choice of new dwelling will be clear.

Dardanus megistos is not usually a resident of the West Midlands and instead can be found scuttling around in less transparent accommodation on the reefs of the Indo-Pacific, where it grows to around 20cm/8".