Have you ever wondered how much some people will pay for a fish? Here's a selection of the most expensive fish, along with an insight into why some of them cost so much.

Once you catch the fishkeeping bug, you had better hope that the fish you fall in love with is one of the less expensive ones. In our never-ending search for the rare and exotic, the cost of fishkeeping can escalate from under £100 a year to tens of thousands.

Why some of us are willing to spend so much on that elusive fish could be down to a number of factors: always wanting what you can't have; spending years looking for a fish and then finding it; or discovering that at long last you have found the species that is right for you - albeit at a price that isn't so perfect.

So what makes some fish more expensive in the first place?

The first thing that affects the price of a fish is its availability – how easily can the shop get hold of the fish you want?

The cold climate of the UK means that inevitably, the tropical species we love to keep naturally inhabit waters that can be thousands of miles away.

You then need to take into account that they are sealed into plastic bags with limited oxygen supplies - so they need to arrive here pronto – so that means flights and subsequent freight charges. The fish also need to arrive in a healthy, protected state too, so add packing charges which include bags, oxygen and polystyrene boxes for insulation.

Once they arrive in this country a retailer or wholesaler may also pay consolidation fees, VAT and delivery charges, and in the unfortunate event of a fish arriving dead, someone still has to pay for its space on the flight that brought it here. 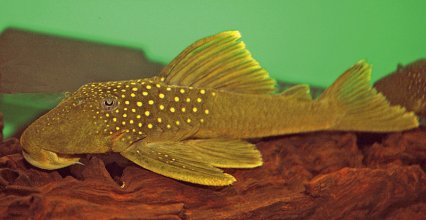 The next factor is how easily the fish can be bred once in captivity. Take the Platy for example. This fish is so easy to breed that many people do it by accident. But compare that to an L-number plec that by and large don't breed that easily in captivity. If you want one of these guys, someone has to locate them in their natural habitat, catch them (a huge task in itself), keep them alive while travelling to an airport, and then go through the processes listed above. Also, for several months of the year the Amazon river system is in flood, making things much more difficult.

As many people know, when you travel on an aircraft, the weight of the luggage that you want to take is a crucial factor, and water is heavy.

The average size of a polystyrene box is 60 x 45cm/24 x 18". Fish are packed in the minimum amount of water possible to lessen airfreight charges and the more fish that will fit into each box the better, as the bill can be split between each fish accordingly.

Small fish like tetras can be packed many hundreds to a box, making airfrieght charges for each fish just a few pence. But a 30cm/12" L-number plec must travel alone, incurring a whopping charge for its air travel.

If a fish is a white or albino version of a species that rarely produces albino variants, then the price just rockets. We've found an albino Adonis plec and knifefish on lists for £500 in the past - and an albino Red-eye arowana for an eye-watering £350,000!

When it comes to expensive fish, it's the oddballs that tend to be the priciest.

We found this white Australian lungfish (reportedly the only one in the world back then) at £27,000 a few years back. 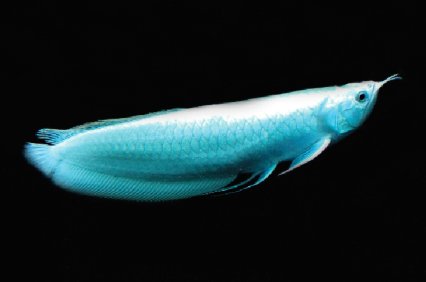 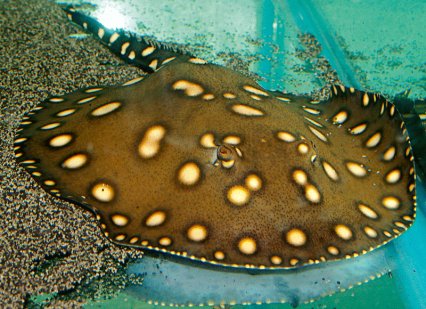 Freshwater rays are popular, but can cost well into the hundreds. Wharf Aquatics in Pinxton, Notts., recently had a pair of Potamotrygon henlei on sale for almost £2,000.

A few years back Channa barca snakeheads were going at £5,000 a pair,

Catfish can be quite an expensive group of fish to specialise in and that lies mainly in the difficulty of catching them in the wild due to their camouflage and nocturnal habits, and the fact that many won't reproduce in captivity. 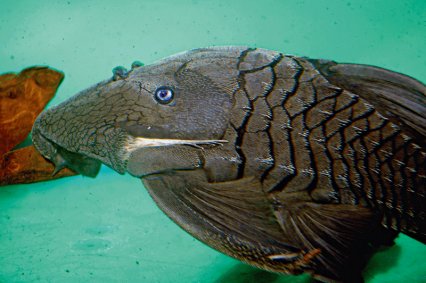 The family that regularly commands high prices is the Loricariidae, with many species typically around the £40-£50 mark. Wildwoods had a Blue eyed plec, Panaque suttoni, on sale at £1000 a year or so back. 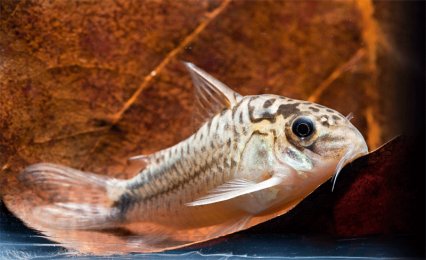 Corydoras can be expensive to collect, too - we came across C. evelynae at Rare Aquatics in Cheshire, priced at £250. See the March issue of PFK for more details on this one.

Brachyplatystoma tigrinum, with its striking markings and not too large eventual size is always expensive - we recently saw one on sale at Wildwoods in Middlesex for £399 for a 17cm/7" specimen.

One catfish that's dropped in price is the Ogre catfish, Asterophysus batrachus. A few years back we saw them offered for sale at £1500. Now they're around the £150 mark. 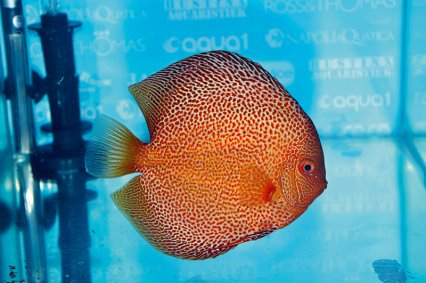 Discus expert Mark Evenden of Devotedly Discus tells us that over the 20 years he has been involved, the prices of domestically bred Discus has come down considerably. This is due to improved understanding of their genetics and affordable equipment, such as RO filters.

He says: "Fifteen years ago a good adult would have cost from a specialist outlet around £85 to £100, today it is much the same, with smaller fish (8cm) costing around £18 today. Large "chains" will charge more.

"I have heard stories of Discus changing hands for £800 each in the UK although this was a while ago and such prices are probably history now.

"Personally the most I have ever paid was £600 for a Pigeon Blood back in the 80's when they first arrived in the UK. Today the same size and quality of Discus would be available for £130.00.

"The exceptions will be those fish that win the large International competitions. For example at Duisburg 2010 the offspring of the 2008 championship winning fish had an asking price of 3,500 Euros each....and all sold!" 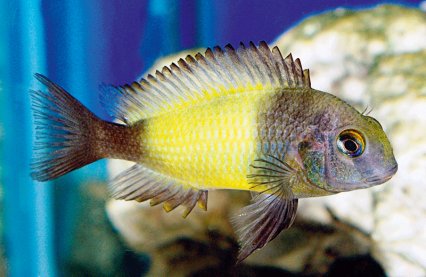 For some reason cichlids don't seem to reach such high prices (or maybe you know of some that do - if so, please tell us!). Eartheaters tend to be around the £20 mark, as do some of the more unusual Apistos and Tropheus (pictured above). 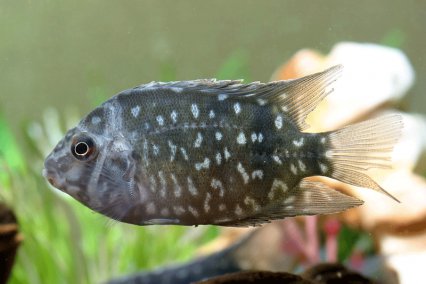 Uaru fernandezyepezi (juvenile pictured above) can cost you around £70 each, as can the true Parrot cichlid Hoplarchus psittacus. We've seen the larger-growing Peacock bass (Cichla orinocensis) on sale at Wildwoods in Enfield for over £120 and the even bigger C. ocellaris for just shy of £100 in the last week or so. And Wildwoods had some Pterophyllum scalare 'Manacapuru red back' at £64.95. We've also seen Altolamprologus calvus 'black' on sale for £85 very recently.

Expect to pay from £30 to £100 for tank bred and wild caught examples of these. 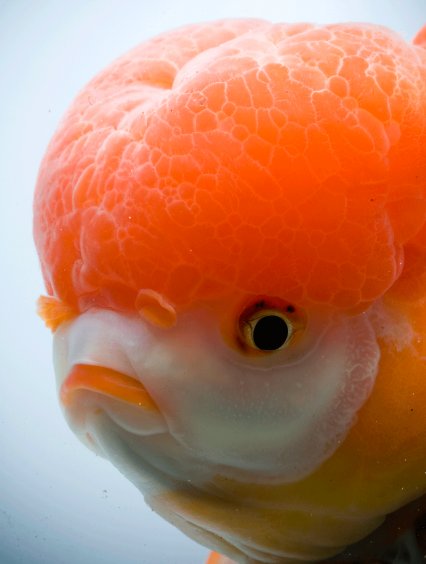 We spoke to Andy Green of Star Fisheries which specialises in high quality fancy goldfish. The above picture of an Oranda priced at £2,000 was taken at Star a couple of years back. Andy told us: "The most expensive fancy goldfish we have sold was £3250. It was a short tail Red/White Ryukin - beautiful clean looking, stunning red/white on the body.

"The percentage of good quality fish produced from a single spawning has a real bearing on the price of the fish, with some varieties more difficult to produce than others. You also tend to pay more from certain breeders, just the same as you would with Koi. This is to do with the quality of the bloodline."

The English owned Kohaku that came second in the All Japan show last year sold for £100,000 and lives with the breeder in Japan, and Pete Waterman allegedly paid £250,000 for a Koi several years ago, but we cannot confirm that.

There will be a special feature looking at the price of marine fish in a forthcoming issue of PFK. Let's just say, if you thought the Gem tang, Zebrasoma gemmatum, is expensive at around £500, you ain't seen nothing yet!