The Harlequin filefish (Oxymonacanthus longirostris) has evolved a remarkable way of hiding itself from predators while it sleeps.

A team of researchers from James Cook University, Australia led by Rohan Brooker, observed the behaviour of over 20 fish of various ages off Lizard Island on the Great Barrier Reef, prior to sunset and at night as the fish settled to sleep.

The fish were seen to search out a position near a growing tip of Acropora coral and then lock themselves onto it head down using their enlarged first dorsal spine.

Once in this position they tucked in their other fins, making them resemble the shape of the growing point of a coral branch (see picture below, Brooker, et al., Coral Reefs, Sept. 2011). 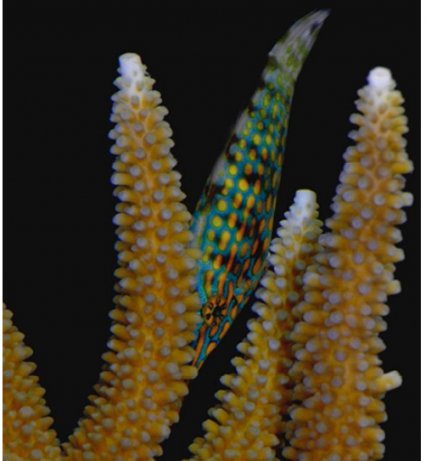 Their striking colouration of orange/yellow spots against a darker green/blue background now mirrored the corals' polyps and the effect was completed by the tip of the fishes' tail which is pale like the growing tip of the Acropora.

This behaviour is known as masquerading and differs from camouflage as the animal uses its shape and colouration to resemble an inedible object, making potential predators ignore it instead of trying to avoid observation completely.

This clever adaptation means the filefish, which eats the corals polyps, can gain both sustenance and protection in one place for minimum effort.

Similar behaviour has been observed previously in O.halli, a relative of the Harlequin filefish found in the Red Sea.