In response to confusion surrounding Betta keeping in the UK, the Anabantoid Association of Great Britain in conjunction with Dr Peter Burgess, have put together a list of definitive guidelines to their care, says Nathan Hill.

According to the AAGB press release, "There has been a recent surge in the keeping of Betta fish (aka Siamese fighting fish; Betta splendens) in the UK, thanks partly to the wide range of colourful varieties now available. There is, however, some confusion regarding appropriate husbandry conditions for this species, particularly regarding temperature requirements.

"In order to avoid welfare issues, a Betta care-sheet has been compiled by the Anabantoid Association of Great Britain (AAGB) in conjunction with Dr Peter Burgess and other aquatics professionals. These guidelines are aimed primarily at the general fishkeeper, particularly novices who may decide to keep a Betta as their first pet fish."

The guidelines are copied below:

"(1) Temperature. There is a misconception that Bettas do not need heated water. In fact, these fish, which originate from South East Asia, require warm temperatures of around 24-28°C, with minimal fluctuations. Hence, the Betta aquarium requires a suitable heater that is thermostatically regulated. Bettas that are kept too cold may appear sluggish, have poor appetites, and will be more prone to disease.

(2) Water quality. Bettas are no different to other fish in their requirements for good water quality. Adequate filtration should be installed, but avoid filters that cause excessive surface-water movement as Bettas are surface-breathing fish from slow-moving waters, and cultivated forms can be weak swimmers.  Regular partial water changes (using dechlorinated tapwater) should be undertaken.Salt should not be added, except as a temporary treatment for certain disease conditions.

(4) Environmental enrichment. Wild Bettas are found in densely vegetated habitats hence their aquarium should contain live aquatic plants, such as java moss and floating/surface-growing species (e.g. Ceratopteris thalictroides) for surface cover. Adequate lighting is required to keep the plants healthy. Bare tanks or bowls may cause stress as the Betta will have nowhere to escape from perceived threats. The aquarium should have a close-fitting cover.

(5) Proper nutrition. Feed a good quality dry diet that delivers all the Betta’s nutritional needs. Cultured live or frozen foods can also be given.  Inferior diets will lead to nutritional deficiencies and digestive problems that may result in poor health and reduced longevity.

(6) Suitable tank mates. A single male Betta can be kept alone or in a suitably-sized community aquarium containing placid species that won’t attack his long fins (conversely, a male Betta may attack other fish with long fins — such as a male guppy). Never keep two or more adult male Bettas together as they will fight, often to the death. Male and female Bettas should not be housed together except for breeding purposes: they are likely to become aggressive with each other either before or after spawning. Breeding Bettas requires a lot of time and experience and many tanks are needed for raising the fry (which will eventually fight) although it is undoubtedly a rewarding and fascinating process." 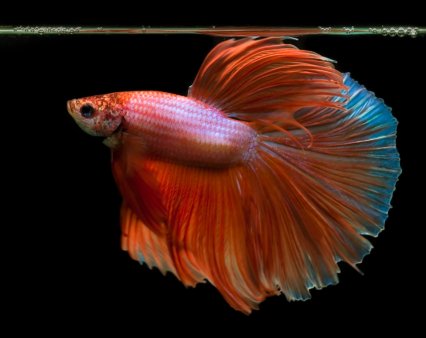 As a thought, the only item I see here that will potentially be contended is the requirement for spacing. Debates have been rife for decades between lay aquarists about what is the right size for a Betta, with suggestions ranging from sweet jars to indoor pond setups.

I suspect this latest offering of 5 litres will still be way too small for some, and I had to double take it myself. That said, I still concede to this day that some of the finest Betta I’ve ever witnessed have been kept in what amounted to a few pints of water. I’d still maintain that for the everyday aquarist at least, bigger is better, and I’d personally aim for tanks of 20 litres capacity or so for a single male. I have no doubt in my mind that 5 litre volumes are achievable, but I’ll eagerly await for more evidence regarding fish stress and small aquaria before I go this way myself.

With the guidelines in place, it might follow that governing welfare bodies such as the RSPCA and OATA take note, and start to put pressure on retailers selling tiny 'Betta racks' to be inserted into tanks, holding multiples of the fish side by side. Whatever the outcome, having a benchmark by which to calibrate keeping standards is no bad thing, and the sooner we can all circulate this list around, the better. Even if it is just to create further discussion, at least we’re all talking about welfare of a fish species and taking it seriously.