A breakthrough in the freezing of embryonic frog cells could also be great news for endangered fish species.

Researchers at the University of Newcastle in Australia have successfully developed the method in a world-first breakthrough that could slow the threat of extinction of hundreds of frog species and could also help in the conservation of fish. 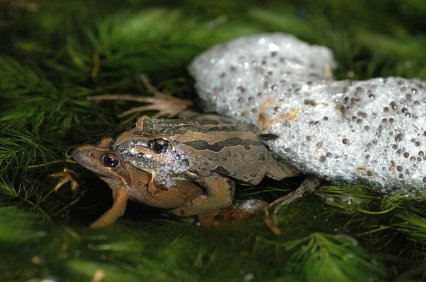 The researchers have separated, isolated and frozen the embryonic cells of an Australian ground frog (Limnodynastes peronii) - pictured above by Froggydarb, Creative Commons - using cryopreservation techniques that will now allow for cloning.

This is the first time anyone in the world has successfully used slow-freezing techniques on amphibian cells, project leader at the University of Newcastle, Professor Michael Mahony, said.

"Almost 200 frog species have been lost in the past 30 years due to disease and a further 200 species face imminent threat – this is the worst rate of extinction of any vertebrate group.

"Amphibian eggs and early embryos, unlike human eggs and embryos, are large in size and have traditionally presented a challenge to researchers attempting to cryo-preserve and store frog genomes, as they would shatter during the freezing process," he explained.

"The new technique, developed by our University of Newcastle researchers, will act as an insurance policy to buy us time for species on the edge of extinction, as we search for answers to diseases and other threats."

Professor Mahony said the development would have wider implications for other species facing extinction.

"This discovery could also help in the conservation of other species with large embryonic cells such as fish."

Frozen zoo
A method of preserving endangered species by freezing DNA and living cells is used by The Frozen Ark - a charitable frozen zoo project created jointly by the Zoological Society of London, the Natural History Museum and University of Nottingham - with the expectation that cloning technologies will have matured sufficiently to one day bring back extinct species. Frozen in liquid nitrogen at -196°C, it is believed cells can remain viable for hundreds of years.