Four beautiful freshwater crabs have been discovered on the Philippine island of Palawan.

Scientists at the Senckenberg Research Institute in Dresden and De La Salle University in Manila discovered the colourful new species of the Insulamon genus of crabs as part of their Aqua Palawana research programme.

But unfortunately various mining projects on the island are posing a huge threat to these and other creatures.

Located between the Sundaic and Philippine region, Palawan combines two of the world’s most important biodiversity hotspots. Around 50% of the species living on the island are endemic.

"In the Aqua Palawana research programme I am head of, we have been investigating the biodiversity of Palawan’s inland waters for over 10 years", says Dr Hendrik Freitag from the Senckenberg Natural History Collections in Dresden. "This also included taking a closer look at the Insulamon crabs and we discovered four new species in the process."

The reddish violet species of the Insulamon crab genus are the only varieties that are endemic to only one or a few islands. The sea means these creatures are unable to spread elsewhere, as they skip the larval stage in seawater and depend on freshwater at all stages of their development. Having been completely separated from their relatives, they have developed their own separate species and genera over tens of thousands of years. 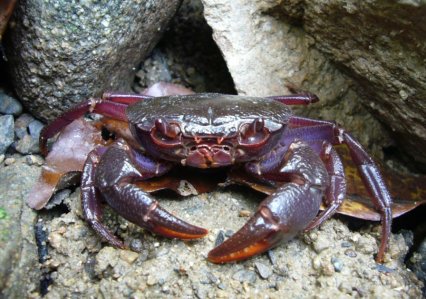 The crabs discovered are all between 2.5cm-5cm//1-2" in size. Picture above shows I. magnum.

"We have proved that the only previously known type of Insulamon is restricted to the Calamian group of islands to the north of Palawan. The four newly discovered species live exclusively on the actual island of Palawan and make it a unique habitat", says Freitag.

However, despite massive protests several mining projects are to go ahead.

"The smaller the remaining natural habitat the greater is the risk to endemic fauna and flora. Even minor environmental changes can lead to extinctions. It is all the more important to do research in this region and show that the biodiversity of these islands is unique and worth protecting", says Freitag and adds "that’s why our next step is to investigate Palawan’s species-rich freshwater prawns".

The study was published in the Raffles Bulletin of Zoology.