Fossil coral as much as half a million years old are providing hope that their modern counterparts may survive massive man-made perturbations to the environment.

In a study published in the most recent issue of the journal Ecology, Danika Tager and coauthors studied eight fossil reefs in Papua New Guinea's Huon Gulf region and concluded that corals and the reef ecosystem were capable of withstanding massive environmental changes.

These changes were imposed by sharply falling sea levels (to as low as 120 metres below the present level) during previous ice ages.

The authors examined the relative species abundance of coral, benthic foraminifera, and calcareous red algae communities from eight fossil coral reefs in the Huon Gulf, Papua New Guinea and formed during successive changes in sea level over the past 416,000 years.

The authors found that the corals survived the drastic drop in sea levels with their diversity essentially unchanged (ie the number of species of corals remained roughly the same), although the taxonomic composition of the corals was significantly different when the sea levels were lowered.

The taxonomic composition of the benthic foraminifera and calcareous red algae were unchanged regardless of sea levels. 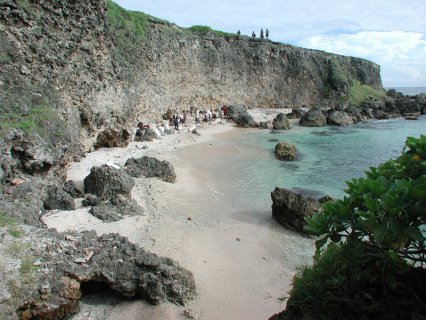 The discovery that the fossil reefs had the ability to maintain diverse and dynamic reef building structures even during low and falling sea levels offers hope that their modern-day counterparts may also survive the massive anthropogenic perturbations to their environment.

According to John Pandolfi (one of the authors of the study), “What we have found suggests that reef systems are able to survive adverse conditions given suitable shallow rocky habitat.

“An interesting finding of this study is that complex coral ecosystems were maintained during the less optimal periods of low sea level. These may have been critical to the re-establishment of nearby reefs once environmental conditions began to improve.”

Just as the fossil Pleistocene reefs may have survived regressions at favourable locations, modern reefs may well be able to exist in refugia long enough to reseed low latitude belts when temperatures become more favourable.

However, the authors temper this optimism with the observation that present reefs may well have different composition and biotic influences than their former counterparts, and the enormous stress they face from anthropogenic impacts are unprecedented and may overwhelm their resilience.