The luxurious plans also feature a swimming pool, cinema and bar as well as solar panels.

The mammoth marine aquarium will hold around 25,000 l/5,500 gal and is designed to form a glamorous aquatic background for the house's staircase. 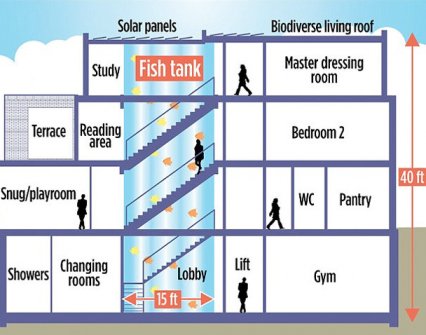 To keep costs down to a mere £250,000, the 'tank' will actually consist of four smaller tanks measuring approximately 4.5m long x 0.9m wide x 3m deep/15 x 3 x 10' one on each floor, stacked on top of each other to give the illusion of a single super sized aquarium. This clever solution not only means the tanks will be cheaper to build and install, but will also reduce the maintenance and running costs which some sources estimate will be around £12,000 a year.

Like many public aquaria, Thierry's tanks will be made from tough, but relatively light acrylic, with each one having its own filtration system.

Exactly which fish species Mr. Henry intends to stock his towering tanks with is not known, but his choices may be restricted by the relatively narrow width of the tanks, especially if he is following PFK's tank size recommendations which suggest that a tank of this width should not be home to any fish over 18"/45cm length to allow them to turn with ease within the aquariums confines. It's not known if Thierry reads PFK however.

Despite all this speculation, his fish-centred rebuild appears to face considerable opposition as the existing house, designed by renowned architect Sir Richard MacCormac and completed in 1999, is considered by some to be an "outstanding piece of 20th century architecture" with calls to have it listed. 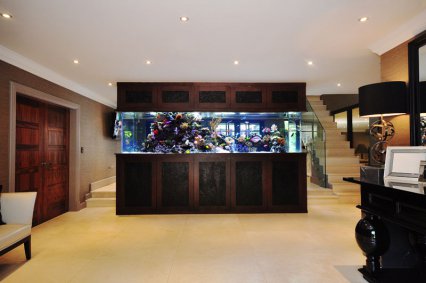 The application is due to be considered by Camden's planning department in March so it won't be long before the fate of Thierry's fishy fantasy is known. If successful he will join the growing list of footballing fishkeepers which includes Chelsea's John Terry, Aston Villa's Stephen Ireland (whose tank is pictured above) and Joey Barton of Q.P.R.

For more amazing aquariums, check out Fish tanks are the new status symbols.