A new scientific paper has just been published on the Lake Malawi mbuna genus Petrotilapia, in which no less than five new species are described.

Although over 20 apparently different species are recognised, hitherto only five of them (P. tridentiger, P. genalutea, P. nigra, P. chrysos, and P. microgalana) have been described, so the new paper doubles the total at a stroke.

The genus has an interesting distributional pattern. None of the known species has a lake-wide distribution, but most rocky shores in Lake Malawi are home to three different species of Petrotilapia, with each found in its own preferred sub-habitat and effectively isolated from the others.

The variation in habitat preference is also reflected in the basic female melanin pattern of the species, and hence they are sometimes assigned to three groups named after a typical member of the group in question: the P. tridentiger group, the P. nigra group, and the P. genalutea group.

The members of the P. tridentiger group are found mainly in the surf zone (wave-washed upper rocky habitat), the P. genalutea group prefers sediment-rich and intermediate habitats, and the P. nigra group (by far the largest) has a preference for somewhat deeper rocky habitats.

As mbuna enthusiasts will be aware, all Petrotilapia species are characterised by broad fleshy lips covered with teeth that are visible even when the mouth is closed. This makes them quite unmistakable in the lake and when they appear in the hobby.

Like many mbuna, the species do not exhibit major morphological differences but can be told apart (including by aquarists) on the basis of live coloration, primarily in males. The descriptions provided in the new paper also rely heavily on this principle.

The new species are as follows (with their earlier, informal, names in brackets):

Petrotilapia xanthos (Petrotilapia sp. ‘hara’) pictured above
This species is a member of the P. nigra group and is known only from its type locality, Gallireya Reef, just south of Chilumba in the northern part of the lake. Its name is a Greek word for yellow and refers to male breeding colour. The largest (male) specimen recorded measured 130.4mm/just over 5". 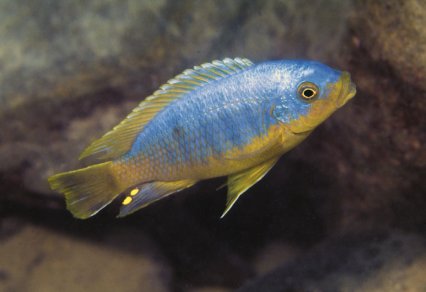 Petrotilapia flaviventris (Petrotilapia sp. ‘yellow ventral’)
Another member of the P. nigra group. The type locality is Chizumulu Island, but what is apparently the same species has been reported from the east coast of the lake between Mbweca in Mozambique and Undu Point in Tanzania. The largest specimen recorded (sex not stated) measured 111.2mm/just under 4.5". The name is derived from Latin and means “yellow belly”, referring to the yellow on the underside of adult males. 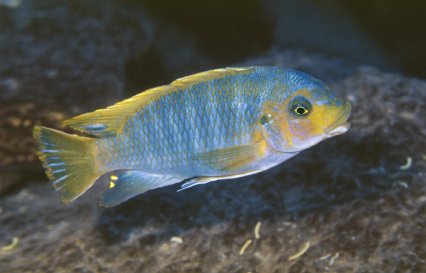 Petrotilapia palingnathos (Petrotilapia sp. ‘retrognathous’)
This species is found at Chizumulu Island and has also been reported at Taiwanee Reef, an isolated submerged area of rock some distance from the nearest land (at Chizumulu). It is a member of the P. tridentiger group and is normally found in shallow water, but not the surf zone. The name is derived from Greek and means “backward jaw”, referring to the lower jaw, which is shorter than the upper. The largest specimen (a male) recorded measured 118mm (just over 4.5". 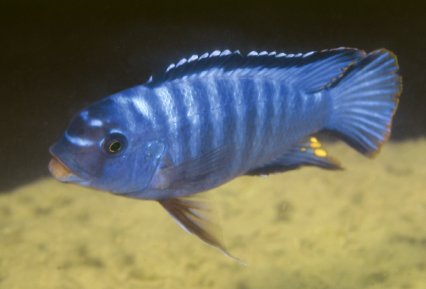 Petrotilapia mumboensis (Petrotilapia sp. ‘mumbo blue’)
As the name suggests, Petrotilapia mumboensis is found at Mumbo Island (the type locality) where it is very common; it has a disjunct distribution and has also been recorded not only at nearby Thumbi West Island but also at the isolated Mbenji Islands. All the sites are in the southern part of Lake Malawi. The largest specimen (sex not stated) measured 127.2mm/5".

Interestingly this species doesn’t fit into any of the three habitat/melanin-pattern groups. At Thumbi West Island and the Mbenji Islands it shares the wave-washed upper rocky habitat with a member of the P. tridentiger group, and there are in total three other species of Petrotilapia (one from each group) present; hence the authors postulate that perhaps it should be regarded as belonging to a fourth group. 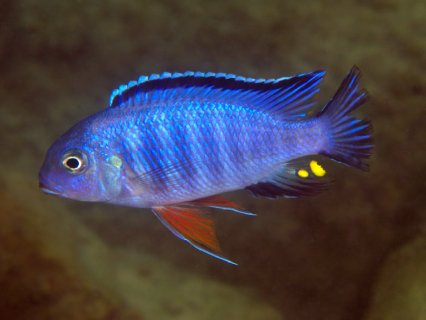 Petrotilapia pyroscelos (Petrotilapia sp. ‘orange pelvic’)
This cichlid, a member of the P. genalutea group, is to date known only from the type locality, Chizumulu Island in Malawi. Its name is derived from the Greek pyros (= fire) and skelos (= leg) and refers to the “fire-coloured” ventral fins in males.  The largest specimen recorded (an adult male) measured 107.2mm/4.25".

Sadly we don’t often see Petrotilapia in the UK hobby. This appears to be based on a perception that they are too large and boisterous to keep, in turn based on a few bad experiences back in the early days when aquarists were still struggling to keep mbuna at all and tank sizes were limited by the strictures of angle-iron frames.

There really seems to be no real reason now why they shouldn’t be maintained in a suitably large fish tank, and hopefully this new paper, which is illustrated with Ad Konings’ colour photos, will provoke some interest in this neglected group.