A paper has recently been published by Patrick Cicotto, Ad Konings, and Jay Stauffer describing five new members of the mbuna genus Metriaclima.

All the new species belong to the Aurora group within the genus, all originate from the east coast of Lake Malawi, and all are endemic to the lake. All will be familiar to aquarists from Konings’ books, where they have previously been pictured, discussed, and given "provisional names".

The authors have also re-examined two other members of the group, M. aurora and M. chrysomallos, and provide detailed comparative data for coloration, counts, and measurements for the two species.  Principal component analysis (a type of statistical analysis) was also conducted for these two species and three of the new taxa which are not geographically separated from other members of the Aurora group, and confirms their status as distinct species.

The new species are as follows: 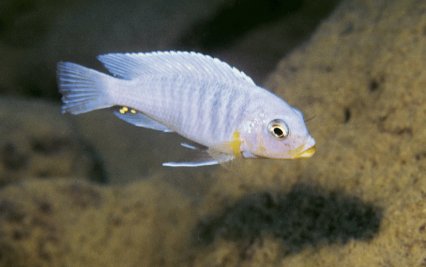 Metriaclima glaucos (previously M. sp. "aurora blue") is known only from the rocky coast at Cobwé in Mozambique. The name is from a Greek word meaning "bluish grey" and refers to male coloration.  The species is similar in male coloration to M. chrysomallos and M. benetos but geographically separated from both as well as having different dentition. Females are indistinguishable in appearance from most members of the Aurora group. 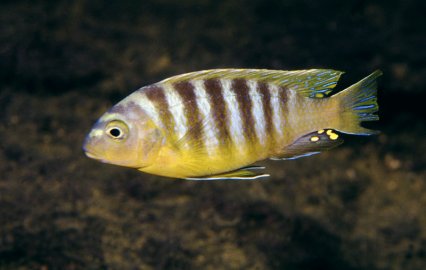 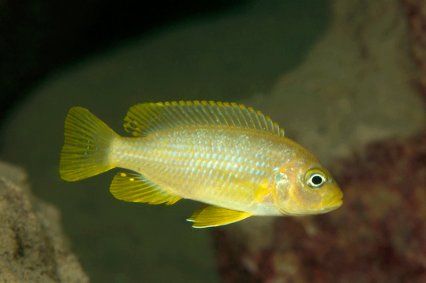 The females of this species (above) are usually yellower than other females of the Aurora group but this distinction isn’t completely reliable. 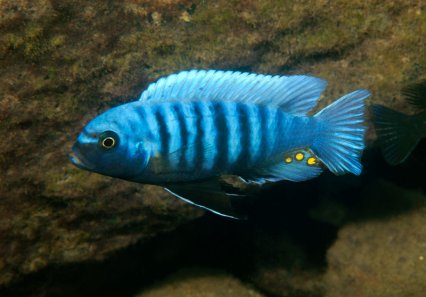 Metriaclima sciasma has been previously known under two informal names, M. sp. "aurora north" and Pseudotropheus sp. "kingsizei north".  The name is from a Greek word meaning “shadow” and refers to the dark ventral fins in males.  The species has an extensive distribution along the north-eastern shore in Tanzania, north of the Ruhuhu River, which, along with the sandy shore south of Mbamba Bay, forms a geographical barrier from the rest of the Aurora group. 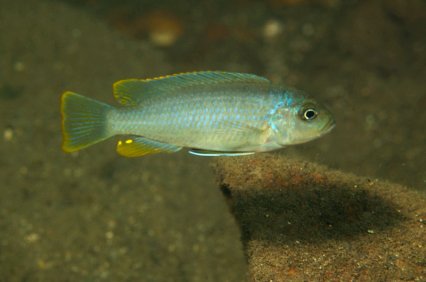 The coloration of both sexes distinguishes them from all other known Metriaclima. 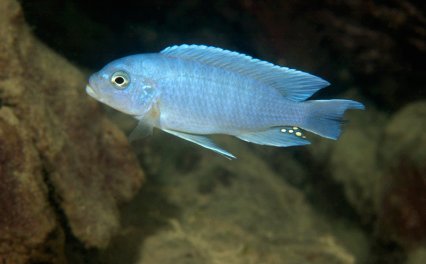 Metriaclima nkhunguensis (previously M. sp. "blue reef") is found only at Minos Reef and Nkhungu Reef off the shore of Mozambique, and the species name means "of Nkhungu". Males are very similar in appearance to blue males (the wild norm) of the sympatric Red Zebra, M. estherae, and also resemble those of several other Metriaclima species but can be distinguished from them on a morphometric and geographical basis. 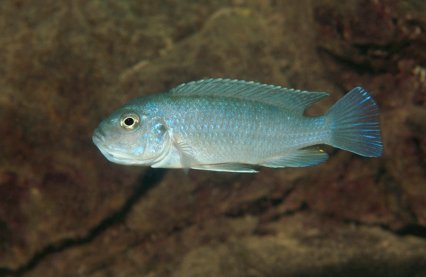 Females (above) are also blue and lighter than those of M. callainos, the only other species with all-blue females. 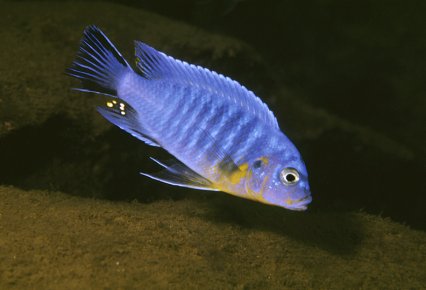 Metriaclima mossambicus consists of three populations that differ in appearance and were previously thought to possibly represent separate species with the provisional names M. sp. "aurora chinuni", M. sp. "aurora black tail", and M. sp. "aurora yellow".  The new research indicates, however, that only a single species is involved.  The name mossambicus means "of Mozambique" and the species is found along a stretch of the Mozambique coast between the Chiloelo River and Chinuni.

Males of the three populations – at Chiloelo (pictured above) Chinuni (pictured below) and Lumessi (pictured at the top of the page) – are significantly different in coloration, but the females all look similar. 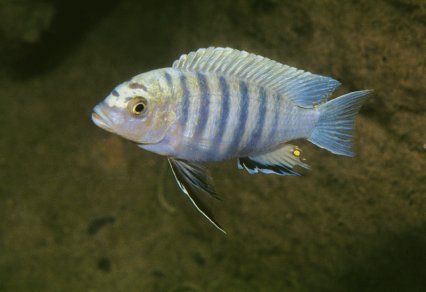 The paper benefits greatly from the inclusion of colour photographs of all the species in life.