This weekend (October 3, 4 and 5), professionals from public aquariums in the UK will descend on Liverpool for the National Aquarium Conference.

NAC is organised by the British and Irish Association of Zoos and Aquaria (BIAZA), giving delegates the opportunity to exchange ideas on a range of topics. These include conservation, husbandry and life support, record-keeping, education and research.

Fishkeepers can directly benefit from the research, as new husbandry techniques and research data are bound to be of interest. Indirectly, some of the wider issues benefit us all. Take BIAZA’s Big Fish Campaign, which (thanks in no small part to the support of PFK readers), is helping to raise awareness of a thorny fishkeeping issue.

The BIAZA Aquarium Working Group (AQWG) meets twice a year, and there are several Focus Groups (FGs) that identify key areas for research to take place, policies to be drawn up or campaigns to be promoted.

FGs evolve and can be created when necessary; previous groups have involved cephalopod husbandry and welfare and touchpool management; whereas, current FGs cover topics such as jelly husbandry, nitrates in aquariums, native seahorse care and breeding and, from a welfare perspective, tankbusters, which has been given support by PFK, and will be familiar to many readers.

The NAC Research and Conservation Fund is also being launched this year, which will assist institutions to develop husbandry and conservation projects.

This year’s main NAC sponsor is Seneye and the event will be hosted by the World Museum.
NAC is currently only open to those working in public aquariums, but we’ll publish the highlights from this year’s conference in the future.

Fish welfare: PFK readers will be aware of BIAZA’s Big Fish Campaign (BFC), which aims to raise awareness of the issue of tankbusters like Pacu and Red tail catfish in the hobby, and Rachel Jones of ZSL London Zoo Aquarium ran through the progress made. This included increased use of social media such as Facebook and development of the campaign website, which receives 18,000 hits per year; filming for the BBC 'One Show' gained high-profile national TV publicity with the filming of a fish rehoming to Bristol Zoo Aquarium and the BFC Roadshow was introduced, with the life-size cuddly Red tail catfish ‘Buster’ mascot helping to bring home just how large these fish get. Buster is visiting public aquariums around the UK and Europe, and may be coming to an aquarium near you… 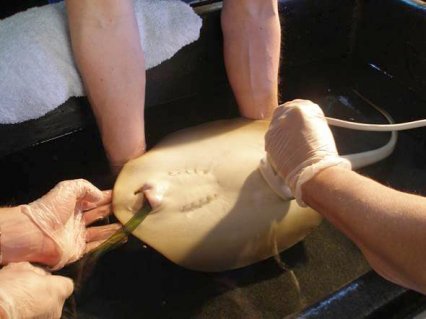 Husbandry: Ever wondered how you could perform a caesarean section on a stingray? Well, possibly not, but James Wright of Plymouth’s National Marine Aquarium explained how complications revealed in the pregnancy of a female ray following an ultrasound examination, meant a pup had to be removed using a novel dorsal (i.e. from the top) procedure by a vet. A fascinating outline of this pioneering operation highlighted the skill involved and documented the ray’s recovery.

How do you move 13 large sharks plus a host of fish to a temporary home while their half-million litre exhibit is refurbished? SEA LIFE Blackpool had to do just this, and at NAC 2013, staff described the capture of the sharks and transferral into an articulated transport lorry, equipped with on-board life support systems. They described the three-day journey to Dorset (with drop-off stops along the way) and how this challenging task was turned into an opportunity to enhance the aquarium’s collection and put breeding programmes in place when considering restocking. 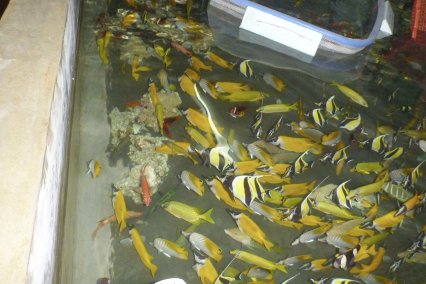 Conservation: Cyanide capture of reef fish should be of concern to anyone who keeps marines. With the deadly effects of cyanide widely known, this method of capture is bad news for any unfortunate ornamental fish caught using this potent toxin (incidentally, cyanide is also used for the much bigger live food fish market). So, how can we tell if fish are caught using cyanide, like those in the picture above were? Chris Brown of SEA LIFE Weymouth introduced a new project called Cyanide Free Sea, the aim of which is to develop a test that can be used on newly-imported specimens highlighting any that have been exposed to the deadly chemical, either directly or indirectly as a result of cyanide fishing in the local collection area. SEA LIFE has been sampling faeces from new fish arrivals and submitting the samples to a Portuguese university to help develop a reliable cyanide test, ultimately with the aim of creating a simple field detection kit. Once the test is validated, any new arrivals testing positive can be flagged, identifying which suppliers need to be investigated.

This project could bring benefits to all marine-keepers, as there should be knock-on effects throughout the supply chain if evidence of poor practice can be identified from suppliers and sanctions taken against them.

Graham Hill, The Deep’s Science Officer, outlined a fieldwork study undertaken with The Cousteau Society in the Red Sea, off the coast of Sudan examining reef health in general, as well as focussing on manta ray populations. The scale of threats to sharks and rays were outlined (including deliberate fishing as well as bycatch), and then the aims of the project were discussed. These include plankton sampling, reef surveys, and the tagging of manta rays — with information being sent to acoustic monitors positioned at selected locations, allowing for ray movements to be tracked, and the identification of aggregation sites. Coupled with DNA sampling, we’ll learn a lot more about these animals, and the information generated is vital for their conservation.

On a wider scale, the project is developing relationships with local fishermen and training for Wildlife Administrators. There’s still a lot of work to do, but the signs from this fieldwork are encouraging, with reefs in protected areas showing high diversity, and good relationships developed with local communities. Whilst it’s tempting to think that reef conservation is all ‘doom and gloom’, it’s good to be reminded that positive things can happen, and that real progress can be made.

(* includes behind the scenes tour)

To be in with a chance to win this and other great prizes, visit the PFK Winit page!