The store is marking its three year anniversary with novelty cakes and a family open weekend on Saturday August 31 and Sunday, September 1.

There will be goody bags and special offers over the weekend as well as a free to enter prize draw to win fishkeeping equipment worth hundreds of pounds.
For the junior fishkeepers there will be free face painting, a colouring in competition to win a starter aquarium, novelty cakes and balloons and there's a children's soft play area on site. Previous events have seen slices of Zebra plec and Clownfish cake handed out to visitors.
Maidenhead Aquatics, parent of Fishkeeper Scotland, opened their first Scottish store Fishkeeper Glasgow in 2010, which has already netted several awards including “Best Aquatics Shop in Scotland”.
Following on from this success, more stores have been opened including the Fishkeeper Edinburgh store in August 2012 and Fishkeeper Inverness in July 2013. 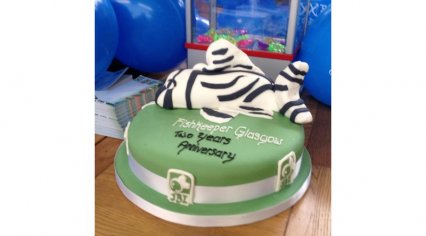 Colin Christian, Maidenhead Aquatics partner, says “Our Fishkeeper Glasgow anniversary weekend has become a regular fixture in our calendar and is always such a fun weekend for those involved. Even more so this year we are holding the event in conjunction with Mackinnon Mills who are fundraising for the Chidren’s Hospice Asscociation Scotland. We look forward to giving something back to all of our loyal customers.”
Fishkeeper Glasgow is open seven days a week and is located within Mackinnon Mills on Kirkshways Road, Coatbridge, just off the A8 and A725 junction.