Controversy is rife in Australia after it appears that a senior health minister covered up a health scare affecting fishermen months before he brought about a fishing ban.

Up to 20 fishermen in the Queensland area reported painful weeping boils on their legs and arms as a result of handling sick fish and working in the water of Gladstone harbour. Several had boils so severe that they had to be hospitalised. One man is quoted in the Australian press: "I got a couple of (fish) spikes in the leg, (and) by the end of the week my leg was that inflamed I couldn't walk," he said.

"I was put in the Mater Hospital at Gladstone. They didn't have a clue what to treat me for, but my doctor was good (and) gave me antibiotics that kills everything."

The fishermen blame large-scale dredging projects stirring up pollutants which have resulted in fish with skin lesions and cloudy eyes and reports of hundreds of dead sea turtles.

Local authorities claim that there had been little change in water quality over the year and that the problems might in fact be due to red-spot disease endemic to Australia and a rare parasite that little is known about. However opponents claim that the data on water quality is incomplete and that further tests are needed to confirm the diagnoses. 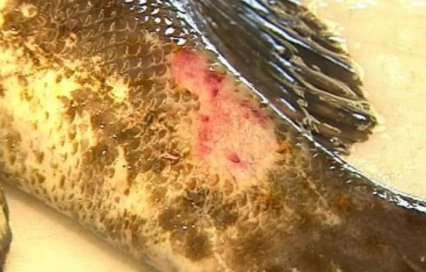 Locals are outraged after suggestions surfaced that local Fisheries Minister Craig Wallace was aware of the problems months before he introduced a three week fishing ban in the area and say that he has lifted the ban too early.

Opposition fisheries spokesperson Mark Robinson clarified that local fishers and marine experts are still very concerned even though the ban was lifted.

"Mr Wallace is attempting to brush this off as a side-effect of the floods. But long-time local fishermen say they’ve never seen anything like it."

At the Australian Seafood Industry national conference last week commercial fisherman David Carter, of Austral Fisheries, said fishermen were worried that mining was being prioritised over fishing which would impact on livelihoods and fresh seafood supplies.

"Ultimately, we can't sit down to a big meal of iron ore or black coal," Mr Carter said.

"Economic growth and development and its impact on the marine environment is likely to leave the commercial fish business downstream. We need the resources but we also need the fishermen."