An inquisitive photographer had a surprise when he discovered an abandoned shopping mall in Thailand had been taken over by hundreds of fish.

Jesse Rockwell says he witnessed an "absolutely staggering amount of fish" living in what was originally the New World shopping mall in Bangkok.

The mall closed in 1997 after it was found to have breached building regulations in its height and then a fire two years later left the building without a roof.

Open to the elements, the mall has slowly filled with rainwater over the years – leading to a problem with mosquitos.  Locals added the fish, which include tilapia and Koi, to help deal with the problem  — and it seems they have done rather well. 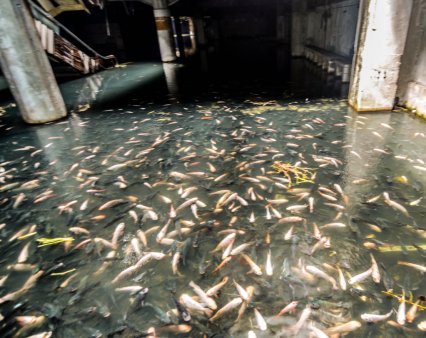 In fact, food is sold by locals to tourists to feed the fish when they come to visit the surreal scene, which has gained rather a following since photos started to appear on Facebook.

Jesse discovered the location through a friend. He says: "We had both lived in Bangkok for nearly ten years, and he had heard about it from local friends. The pictures I took give you an idea of the absolutely staggering amount of fish."