The Deep aquarium in Hull is celebrating the birth of its first baby Zebra shark.

The female shark, which hatched out last Monday, weighed in at 72 grams and measured 23cm/9" in length. She is growing steadily and is now 25cm/10" long.

Zebra sharks (Stegostoma fasciatum) take a long time to mature, so staff at The Deep were delighted when mating behaviour and "practice eggs" were seen in the aquarium's Endless Oceans display.

These practice eggs do not contain a yolk and are the first signs that a female shark is maturing.

After a few months an egg containing a yolk was finally produced and this was transferred to a holding tank in The Deep's quarantine area. The gestation period for the Zebra shark is about six months in the egg, so it was a bit of a waiting game for excited staff at the aquarium.

Kathy Duke, Curator at The Deep said: "We used a technique called 'candling', which is where you shine a light through the egg casing under water and we were absolutely delighted to see a shark embryo in there. 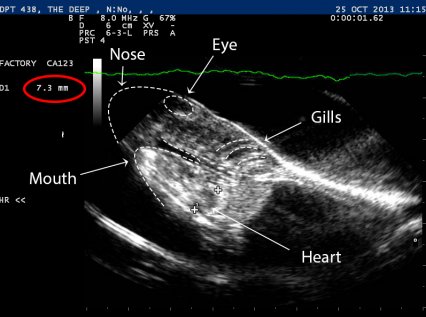 Later on in her development, our vet and science officer used an ultrasound to take a better look inside the egg and was able to measure the size of the baby shark's heart which was 6mm in diameter — the size of a pea.

"Although these first few months are a delicate time, she is enjoying feeding on prawns and mussels. We have taken advice from colleagues in America on feeding and growth rates, so we are able to provide the best possible care."

When Zebra sharks hatch they have black and white stripes, which develop into more of a leopard pattern later in life, giving them their other name of Leopard shark.

The Deep currently holds the European studbook for Zebra sharks, which helps co-ordinate all the breeding efforts for this species across Europe, sharing vital knowledge on their reproductive biology.

The young shark will remain at The Deep while her growth rates are closely monitored. If all goes well she's likely to be transferred to another aquarium at a later date so she can be paired with an unrelated male Zebra shark and one day hopefully produce some eggs of her own.