Many members of the AMGK also keep Guppies and are members of Fancy Guppies UK (part of the International Fancy Guppies Group — a World-wide association for guppy keepers). The FGUK holds an annual league with seven shows around the country. At the invitation of the AMGK, their second leg was held at alongside the Goldfish Open Show at West Orchard Church Hall in Stivichall, Coventry.

There were 189 fancy goldfish on display after being judged to the Nationwide Goldfish Standards UK. There was also an auction of home-bred goldfish attended by 50 visitors and showers.

The Best in Show goldfish was a Nacreous Fantail by Andrew Barton of AMGK. 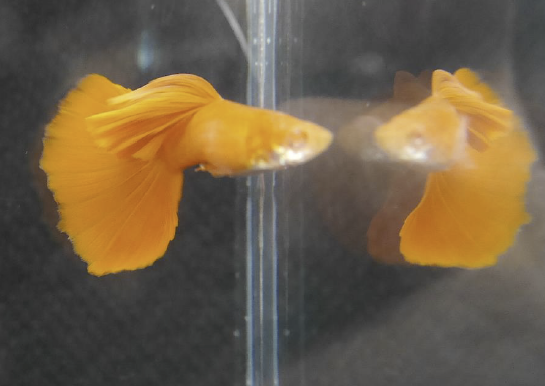 The Best Fancy Guppy (highest pointed) was a 2-6-1 Delta Tail-Albino-Red with 82.33 points by Derrick Clayton of FGUK.

More guppies...
The next leg of the FGUK league will be with the Yorkshire Association’s Annual OS in Stockton-on-the Forest on Sunday, August 14, 2016. Their fourth leg will again combine with fancy goldfish as all four UK goldfish clubs meet at the Nationwide Open Show in Telford on Saturday, September 24.