Evolution in action as small cichlids lose out to bigger rivals Competition between large and small versions of the same cichlid in Lake Tanganyika could lead to them becoming two separate species in the future.

Telmatochromis temporalis consists of two ecomorphs (local varieties of a species whose appearance is determined by its ecological environment), that strongly differ in body size and the habitat in which they live.

There is a big version of the fish that lives on the rocky shoreline, and a small version (pictured at the top of the page) which is roughly about half the size, that lives and breeds in accumulations of empty snail shells found on sand. 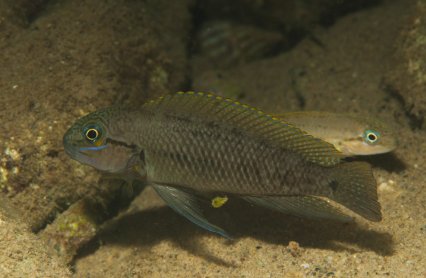 According to a study by Dr Martin Genner from Bristol's School of Biological Sciences and colleagues, the bigger fish (pictured above) outcompete the smaller ones, driving them away from the preferred rocky habitats and into the neighbouring sand, where they find shelter for themselves and their eggs in the snail shells.

"In effect, big and small fish use different habitats; and because of this habitat segregation, fish usually mate with individuals of similar size. There is virtually no genetic exchange between the large- and small-bodied ectomorphs," Dr Genner said.

Speciation occurs when genetic differences between groups of individuals accumulate over time. In the case of Telmatochromis there are no obvious obstacles to the movement and interaction of individuals. But, the non-random mating between large- and small-bodied fish sets the stage for the evolutionary play.

Competition for a limited resource, such as food, space or shelter, was one of Darwin’s mechanisms for the formation of new species.

"Our study is really one of the first to clearly show the role competition plays in the origin of new species," said study co-author Dr Lukas Rüber, from the Natural History Museum London.

The researchers are unable to say as yet whether these cichlids will definitely become two separate species, but the evidence points towards this happening in the future.