Don't miss the Festival of Fishkeeping in October! The FBAS Festival of Fishkeeping returns to Hounslow Urban Farm in Middlesex on October 4-5, 2014, for a fish-packed weekend and fun for all the family.

The Festival offers a great chance to see some of the very best fish in the UK at what is the biggest event in the FBAS calendar.

There will be Japanese Koi and Discus and this year will also feature three distinct displays for Livebearers, Bettas and Killifish. These displays will be on show for the whole two days of the Festival and exhibitors will be asked if they wish to sell their exhibits at the end of the show.

The Festival Open Show to be held on the Saturday will, therefore, lack Classes N o-t, O, P, Q, R, S, T and X o-t, Ea and F, but still feature the main basic Classes and the traditional 'splits' in Characins and Cichlids.

The two Nano and Society Furnished Aquarium Competitions will be featured as in previous years.

So what did PFK think to last year's Festival?
PFK's Nathan Hill attended last year's Festival, with the then PFK editor, Jeremy Gay. This what Nathan had to say about the 2013 event, which also took place at the Urban Farm, so if you're unsure whether this event is for you, read on...

"Many people don’t know what to expect from such an event, and even now, having attended so many fishkeeping gigs myself, I’m still unsure of what I’ll find.

"To that end, clubs and societies were in strong attendance. The judges were unleashed upon the show tanks as the curious public were held back, and the difficult task of deciding the winners commenced. 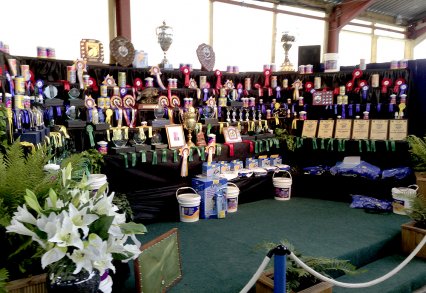 "All that is great if you’re at the absolute top of your game, but what interest would an event like this have for the more lay aquarist who might feel alienated by the concept of fish classes, grades and trophies?

"Well, plenty is the answer. Event organiser Joe Nethersell performed something of a stroke of genius with his choice of location, as well as his relentless rallying of support for the weekend.

"If your thing is cheap trops, there’d be something for you, namely the many stands selling not just farmed fish but also small clutches of rare and unusual species bred by members of the clubs and societies in attendance. Worried about the price of rare fish? Don’t be, these were among the cheapest I’ve come across, and the quality of each and every clearly loved fish was stupendously high. Suffice to say that we were happy with the £2 pairs of wild guppies that we picked up, which bred just a couple of days later.

"Prefer Discus? Then you’d have loved the generous display of big — and I’m talking big — game-changers in attendance. We’ve all heard the speculative, almost pleading, claims that discus reach 'dinner plate size' but it’s only when you’re confronted with one of these flattened leviathans that you realise how substantial such fish can become. It stands to reason that nobody had a bad word to say about any of those Symphysodon on show.

"More of a dry goods buff? Interested in tanks, or boot fair-esque bargains? Then brace yourself. As always a selection of small, home-made breeding racks, show tanks and custom builds was available, at prices that just make you think ‘how?’ Like fishkeeping books? A veritable fishkeeping library of older tomes was available, with prices so low that we actually felt bad handing over so little for them. When you’re picking up classic works by famed authors like Dr Paul Loiselle for the equivalent of 33p, you know you’re on to a good thing. 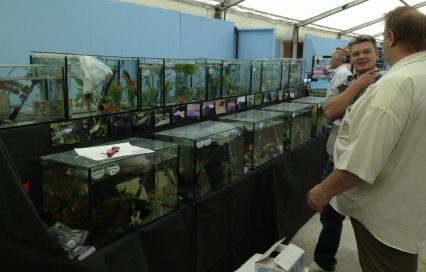 "New and used hardware dripped from every stall, with classics like Eheim canister filters at £5 for two. If you were coming along for bargains alone, you’d have left very happy. Amwell Aquatics had a spread of newer, cutting edge equipment on sale, and between the participants of the festival, it was easy to track down anything you might need for your hobby.

"All of this is appealing to the fishkeeper of course, but what about the rest of the family? Well, Joe had that covered too. Face painters were busy performing their craft every hour of the day, decorating kids up as dolphins or seahorses and many other designs, and colouring competitions also helped to keep them occupied. Once the appeal there had died down, there was still the bouncy castle, the miniature fairground and the zoo!

"Whether your family likes fish or not, it’s only the coldest of hearts that can’t see the appeal in a range of exotic animals from Alpaca to pigs, ponies, rodents and reptiles. Not once did I see a child tugging at their parent’s arm complaining of boredom. Instead kids were just notifying which interesting thing they were going to look at next, whether that happened to be a massive snake or a tamed skunk."

The FBAS tells us that the 2014 event will also feature a Family Pet Day, which is new to the Festival.