Discus (Symphysodon spp.) show parental care that is more akin to mammals than other fish, according to recent research.

It is a well-known fact that breeding Discus produce mucus over their bodies on which the fry feed, but the close similarities with lactating mammals was not revealed until Jonathan Buckley and co-authors studied the mucus composition and the parent–offspring relationship over a single breeding cycle. Their research is published in the most recent issue of the Journal of Experimental Biology.

The authors observed the behaviour of breeding parents and their fry in aquaria, looking at the distributions of parental care (between the male and female) and the fry on the parents, as well as the bite rate of fry. They then collected and analysed samples of mucus from both captive and wild-caught Discus before and during a breeding cycle.  In this analysis, the total protein, cortisol, immunoglobulin, and sodium, potassium and calcium concentrations of the mucus sample were measured.

They also found the bite rate of the fry to increase over time, peaking at the 12th–15th day and slowly decreasing after that. 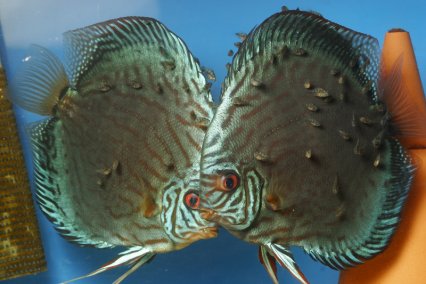 Weaning period
According to the authors: "The change in parental behaviour from that seen in weeks 1 and 2, which involved close attentive contact with young, to the behaviour observed in weeks 3 and 4, which involved parents gradually impeding the feeding of young, suggests a period of conflict and the presence of a weaning period similar to that observed in many birds and mammals."

The authors also document a change in mucus composition over the period of a breeding cycle. The levels of immunoglobulins in the mucus of the parents increased significantly once eggs were laid, peaking when the fry reached free-swimming stage. The authors consider this to comparable to the provision of colostrum in mammals.

The protein content of the mucus also changed over the breeding cycle, with a significant increase once the eggs were laid and some decrease as the young matured, dropping to its lowest levels in the second and third weeks (this is thought to be because of the Discus fry feeding the most intensively during this period).

The change in protein and immunoglobulin levels in the mucus of the parental discus is believed by the authors to be hormonally regulated, in a manner similar to changes seen in mammalian milk.

The authors concluded that ..."the reproductive strategy of Discus fish has more similarities with that of mammals and birds than other fish species."