Colourful visitor is the first seen this century A group of divers exploring off the coast of The Lizard peninsula in Cornwall have photographed a rare species of gurnard.

Des Glover and business partner David Roberts of Kennack Diving photographed and videoed the fish in September, but were not certain just what they'd seen until after returning to shore.

Having checked through their books they made a tentative identification that the fish was a Streaked gurnard, Trigloporus lastoviza but having never seen anything similar in many years diving they sought confirmation elsewhere.

The ID was eventually confirmed by Cornish marine life expert Dr Paul Gainey and the British Marine Life Study Society, making the fish only the fifth positive sighting in British waters in the last 40 years - and the first this century. 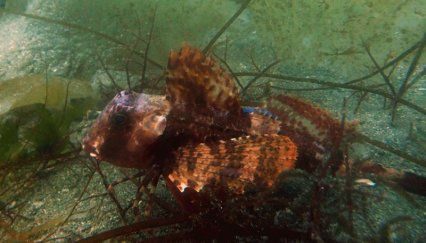 The Streaked gurnard is generally considered an occasional late summer migrant to UK waters from the warmer, more southerly waters of the eastern Atlantic and Mediterranean, but is sometimes found as far north as the coast of Norway.

They grow to around 40cm/16" and feed on crustaceans. They find this food with the aid of specially adapted pectoral fin rays with which they appear to 'walk' across the seabed.