Clash of the crayfish: Why the Americans are winning Aggressive American signal crayfish are threatening Yorkshire's native White-clawed crayfish populations because they have better resistance to parasites and are less fussy about what they eat.

The native crayfish (pictured above) suffers from two parasites: Plague, which is carried by the American invader, as well as Porcelain disease which makes the native crayfish sluggish and suppresses their appetite before eventually killing them a few years later.

Yorkshire is one of the last strongholds of the White-clawed crayfish, which is being driven out of Britain’s waterways by its hardier American cousin, introduced to Britain in the 1970s for fish farming. The advance of the signal crayfish over its native rival has implications for the biodiversity of Britain’s rivers as the diversity of prey is reduced and the invaders’ appetite for fish eggs causes a decline in the fish population.

Although the White-clawed crayfish is listed as an endangered species in Britain, the reasons for its decline and the American species’ success have not been well understood. Now, researchers from the University of Leeds’ Faculty of Biological Sciences have been trying to work out why the signal crayfish has been gaining the upper hand, and how this information might be used in conservation projects.

Their study, published in the online journal PLoS One, compares how quickly the two different species deal with food. 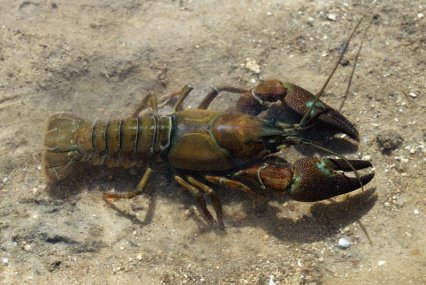 The American signal crayfish (pictured above) ate up to 83% more food per day than did their native cousins. The research also showed that White-clawed crayfish are much more choosy about what they eat, preferring particular types of prey, while the signals eat equal amounts of all prey.

The White-clawed crayfish are also affected by a common parasite, porcelain disease, which affects their ability to catch prey, leading affected crayfish to eat 30% less. The American signal crayfish, on the other hand, seem unaffected by the parasite.

Dr Alison Dunn, of the Faculty of Biological Sciences, at the University of Leeds, who led the study, explains: "The signals eat much more compared with the native crayfish. But the situation is exacerbated by a parasite which essentially changes the native’s behaviour - the White-clawed crayfish can’t eat or handle as much food as the signal, because the parasite weakens its muscles.

"The huge appetites of the signal crayfish can have a massive effect on the whole ecosystem. In particular it affects biodiversity because there is a reduction in the numbers of prey. In some Yorkshire rivers, for example, the fish population has declined because signal crayfish are eating large numbers of fish eggs."

"Parasites are a fascinating and vital part of any ecosystem and you have to consider their effects when looking at biological invasions," she says. "We hope our findings will help us make predictions about how this invader might spread and help with management strategies."

Humans too can play a part in protecting the White-clawed crayfish by understanding how invading species spread. The signal crayfish is able to move overland of its own accord, but may also be inadvertently moved around in, for example, damp fishing gear.

"We need to be much more careful about how we move animals and plants around from habitat to habitat, and raise public awareness about these issues," says Dr Dunn.