Can we fake the reefs? Are artificial reefs the answer to the oceans' eco-problems? Nicolette Craig looks at attempts, both good and bad, to replicate nature.

Just off the coast of Lombok in Indonesia the sea is crystal clear, the diving is breathtaking and fish abound — but this isn’t quite a natural paradise, as this coral reef is artificial!

Few can be unaware that rising sea temperatures, acidity, overfishing and pollution are all combining to kill swathes of corals, some studies revealing an 80% reduction in cover.

Many scientists and conservationists have been searching for a solution and various proposals include the creation of made-made reefs.

Such constructions have varied from sunken ships and submerged tyres, through to memorial ‘reef balls’ filled with the ashes and trinkets of the dear departed.

A British artist has even erected an installation consisting of 400 statues off the coast of Mexico which, while an unusual idea, is supposed to deflect tourist interest away from natural coral reefs in the area.

Excuse for waste
Other ‘reef’ concepts have been misguided, leading to much debate as to whether artificial ones are ecologically effective.

Professor Callum Roberts, a marine conservation biologist who focuses on coral reefs, told me of places around the world that use the pretence of setting up artificial reefs simply as an excuse for dumping waste.

"Many of the most ardent advocates of artificial reefs seem to have large quantities of bulky waste to dispose of — be they tyres, power station ash, railway stock, cars, ships and oil rigs. I once saw a newspaper photograph of three rubbish trucks being pushed off the side of a boat in Thailand.

The caption indicated that this was a scheme promoted by Queen Sirikit to 'rescue the sea from years of overfishing and pollution.'"

The states around the Gulf of Mexico all have ‘artificial reef programmes’ dedicated to disposing everything from old highway bridges, oil and gas platforms, mine spoil, concrete, even school buses — with some states also granting disposal licences to individuals.

These programmes aren’t necessarily without merit. Douglas Fenner, a coral reef monitoring ecologist for the Department of Marine and Wildlife Resources in American Samoa said: "While I don’t necessarily agree with artificial reefs, corals seem to be able to grow in many hard surfaces, though they may prefer some over others. 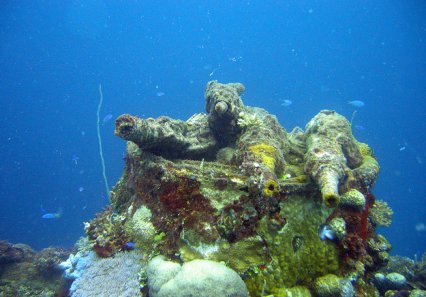 "Some of the ships sunk in World War Two in the lagoon at the Chuuk (Truk) island group in the Pacific are now favourite dive sites, having lots of corals and fish. Where there are no hard surfaces for corals to grow on and no corals, such hard surfaces can provide habitat.

Fish attraction
"Artificial reefs also attract fish. Some people have thought they produce fish, so good habitat allows larvae to settle and grow. However, if fishing is allowed there it can remove them, and as good habitat it then attracts more fish, which get caught.

"It is then the same thing as a Fish Attraction Device or FAD, which is a common fishing tool, and in this case helps fishermen deplete fish on reefs.  If fishing is not allowed on them, then they could indeed help fish."

While many of these reefs may attract more fish and deter bottom trawlers, this is not necessarily the same as increased biodiversity and may not be the same as a natural coral community. As such, many scientists feel less than happy about the idea.

Professor Roberts added: "The idea makes me uncomfortable. There are better ways to recover productivity than to dump rubbish in the sea."

However some artificial reefs seem slightly more ecologically successful and Scott Bartkowski, of Artificial Reefs Inc., based in Florida, has set up a series of marine life habitat creation and shoreline stabilisation (barrier reef) systems which have been running for more than 14 years.

Thousands of reefs have been erected worldwide, from the Gulf of Mexico and Caribbean through to the Atlantic Ocean, Persian Gulf, and the Pacific Ocean.

Scott explained: "We see immediate colonisation and have natural biomass counts on the units after the first year of placement, producing an average of 0.45 metric tons of biomass (per square metre of substrate) annually. After two years the system becomes a full-blown natural reef, totally unrecognisable as the original marine grade concrete reef structure." 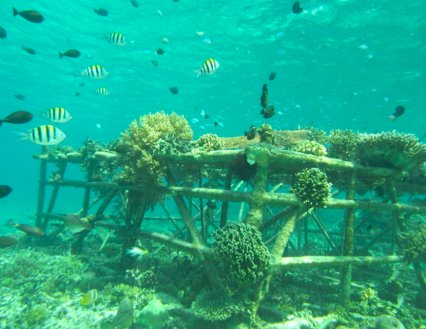 Creating hope for the islands
A growing system of artificial reefs has been installed in Indonesia, off the coast of the Gili Islands.

It was instigated by Anna Walker and Delphine Robbe in 2004 after a successful three-year project to stop local fishermen using catching techniques such as dynamite, cyanide and Murami fishing – whereby rocks are dropped on the reef to scare fish out into waiting nets.

Anna said: "For a while I felt I was the only one who cared about the future of the reefs and not just about making as much money as possible from diving them.

"Others did care, of course, but didn’t give the time to help me set up and run the Gili Eco Trust. Now, with Delphine at the helm, the trust has gone from strength to strength."

Following a seminar in Bali to discuss the merits of an artificial reef-building process known as Biorock, Delphine and the rest of the trust felt that these types of reefs will restore some of the damaged coral around the islands.

The Biorock process involves running a small electric current through a submerged steel frame, which then encourages limestone to attenuate and accelerate the growth of small fragments of coral on it. 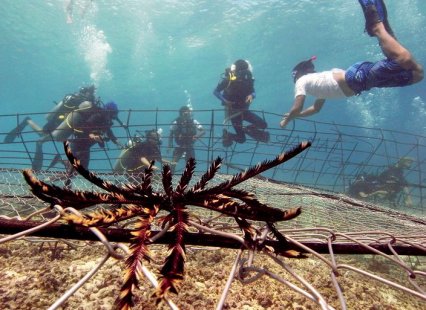 Storm resistant
The developers estimate that, as a result, the coral will grow three to five times faster than naturally and is much more able to withstand storms and even bleaching.

Delphine said: "Biorock reefs have different shapes and we have done some pretty artistic ones too!

"They initially look like big cages, but after one day and with some coral attached each one is already a reef as fish populate it straight away!"

Anna confirmed there are now 63 such man-made reefs and numbers are growing fast. She felt: “While not everyone in the scientific community agrees that this concept is anything other than a tourist attraction it is a step in the right direction."

Did you know?
In Florida, New Jersey, and North Carolina In the 1970s, millions of tyres were dumped in the ocean and bound together to create artificial reefs. Thirty years later, at a cost that far outweighed the original project, the tyres were dredged back up again.

They had never been colonised and the chains holding them had come loose, effectively becoming a battering ram crashing against the natural coral reefs during any storms.