A 1.5m/5' Galapagos shark named Desmond has been released back into the wild by the Bermuda Aquarium, Museum and Zoo.

The shark has been a resident of the North Rock Tank at BAMZ for the last two years and is estimated to weigh about 50 pounds. While he initially did well in BAMZ’s care, over the last year he developed a rub lesion on his nose which if left would have worsened. It was a sign that he was not thriving as well as the staff would have liked, so on Good Friday, staff at BAMZ, in conjunction with the research and camera crew of the upcoming television series, Ocean Vet, released him.

BAMZ says: "Transporting a shark can be a very challenging scenario for a variety of reasons. Every movement must be planned in advance and carried out quickly and carefully. One of the most important challenges is that many kinds of sharks, including the Galapagos, need to maintain ram ventilation, which means that water must continually pass over their gills in order to keep breathing. As a result the Aquarium built transport boxes that are specially fitted to allow water to be pumped over the shark’s gills continuously.

"Also, sharks can build up high levels of lactic acid very quickly in their muscles, and unlike humans, only have a limited buffering mechanism to prevent damage. To help protect the shark, it was placed in state of tonic immobility by rolling him onto his back, which induces a state similar to hypnosis. In addition, a veterinary team, consisting of two veterinarians and a veterinary technician assisted with the transport to reduce the risk. Special drugs and intravenous solutions formulated specifically for sharks had been prepped in advance to provide veterinary care if necessary." 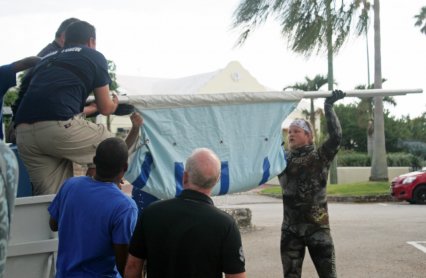 Aquarists at BAMZ had been working for weeks to familiarise Desmond with a net, with which they captured him in the tank. He was then, literally, run in a sling to a waiting transport box which had running water and was being bubbled with pure oxygen on the back of the aquarium truck.

Desmond was then driven across the street to a boat, also equipped with a transport box with running water and oxygen. A hose was inserted into his mouth to make sure raw salt water continued to pass over his gills, while an aquarist kept him moving in a swimming pattern to assist with his metabolism and reduce lactic acid build up in his muscles.

Once settled onboard the boat, Desmond was then quickly taken out to North Rock where he was successfully released. Unlike previous shark releases, Desmond’s movements will not be tracked, as he was deemed too small to be fitted with a satellite transmitter, but he has been fitted with a NOAA Fisheries Tag so he can be identified in the future.

"Having this particular species of shark does tell an important story and as such they are an important display animal in aquariums. Sharks are increasingly threatened in the wild worldwide. It is important that people understand them, respect them and realise they are a vital part of the ocean’s ecosystem," stated Dr. Ian Walker, Principal Curator for the Bermuda Aquarium, Museum, and Zoo.

"Successfully moving sharks requires in-depth knowledge of their biology and physiology, and a coordinated team approach. I’d like to express my thanks to the talented team at BAMZ, the Ocean Vet team, and particularly Dr. Neil Burnie and Choy Aming for their continued assistance and support."

Footage of Desmond’s release will appear in the series, Ocean Vet, when it hits television screens around the world some time next year, which is, in part, sponsored by the Atlantic Conservation Partnership, the US-based sister charity of the Bermuda Zoological Society.