Behind the scenes: How a step-by-step rolls Nathan Hill explains what really goes on during the filming of one of our step-by-step tank set-ups.

This last month has been amazing for me since joining as the technical writer for PFK. If nothing else, I get first dibs on reading any new articles that get sent through. I literally get to see the magazine first, and there's a real buzz in that.

One of the high points for me is getting to do the step by step setups. Before I'd started with the mag I was little unsure of how these came together, and so now I make a point of being at the scene, firsthand, for any that take place.

This month we had a good one, and I mean a really good one.

All I'm going to say is that I never expected to see such good results from synthetic plants.

I was astounded at both how quickly it all came together, and yet how much work went in to getting the shoot.

Of course, the tank itself was a joy to watch, being transformed from an empty Juwel Rio 240 into a hive of colour and movement.

Watching Dean Barratt from Rosewood, our guest aquascaper do his thing was a work of art in itself, but seeing how much work our studio photographer, Jacques, had to put in to get things just right was out and out awe inspiring.

From the offset I made a point of grabbing one of the older studio cameras. Jacques set the thing up to work in the awkward lighting of the studio, and then left me to it, scuttling around and snapping the work at every step of the way.

This shoot took place in our own studio, at the bottom of the Bauer building. The studio we have is huge, from where they used to shoot cars and motorbikes, and everywhere I go I'm stumbling over cables or banging my noggin against some gigantic swinging lights.

The tank itself needed to be set up from scratch, and I mean from scratch. We don't have pre-made tanks sat in cupboards, waiting to be wheeled out, and each shoot involves an entirely fresh set of gear.

In this case, we had to build up the cabinet for our aquarium, something I'm quite out of the loop with, and I was amazed at just how raw my fingers were from all of that spannering and screwing involved. Memories of painful fingers in my retail days were strong at this point.

To make the tank suitable for shooting we need to get it as clean as possible. We spent a good twenty minutes or more once we'd positioned it, giving every surface a thorough work over with towels, paper, and even cans of compressed air to get rid of any dust and debris. And still we weren't ready to go. 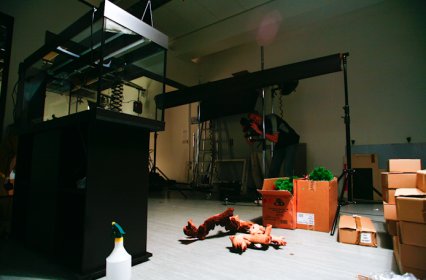 Next I stood back and watched (and pictured) as Jacques went through a range of lighting options. There were soft boxes on huge booms swinging around everywhere as he got things just right. It wasn't a case of just kneeling there and taking his shots, either. We had to set up a screen to keep down reflections, and before I knew it we were cutting a tiny window into a sheet of jet black paper about the size of my living room wall.

By now, sat centre stage and drowning with lights, the tank was starting to look very conspicuous. At this point, our aquascaper could begin. Flitting between notepad, camera and laptop, I strived to record as much as I could.

The trickiest bit in writing tends not to be finding things to write down, but working out what needs to go. For now, I recorded everything while everyone stood back and let things take shape.

All in, with my interfering and probing with questions every ten seconds, the tank took the best part of half a day to photograph alone.

Although we have a pretty clear idea of how we want things to pan out from the offset, we deliberately take more shots than we need, with extra steps, so that we can sift through everything after in case there's any better way of showing the story. 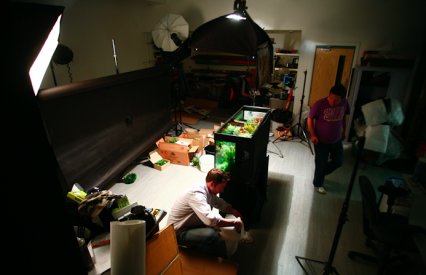 Eventually, when the tank was completed we all simply stood back in silence. The end result is not what any of us had expected, and soon there were people venturing in from outside, from other magazines and departments to have a look.

Word spread pretty fast, and anyone with even the slightest interest in fish came in, doing exactly the same as I had; raising an eyebrow and standing there in silence.

One week later, as I write this, we’ve now introduced a clutch of some of the most stunning Emperor tetra, who have settled in well and are shoaling nicely. The tank itself is now complete, and is something that I would happily have in my home, any day of the week.

It stands to reason that I've tried to give Jeremy the elbow on this one, wanting to write it up myself, but he’s kept this one for himselfand so all I can say is keep an eye out for the March step by step aquarium. I've got a feeling it's going to ruffle a few feathers, especially in the Amano focused ranks of plant growers.