The sale of Barley straw used as a pond algaecide is under threat. according to news released by OATA.

Popular products sold to control algae growth in ponds will have to be taken off the shelves in the autumn if OATA’s fight to get it removed from the new Biocides Regulation is not successful.

Pouches of barley straw or bottles of extract are due to come under the full force of the EU regulation from September. This is despite assurances from officials in the European Commission to OATA, received as far back as 2005, that the organic substance would not be included.

The trade association says its inclusion in the Regulation is 'frankly bonkers' because tonnes of barley straw are put into water reservoirs every year to control algae and this practise will not be covered by the new law.

When barley straw is sold as a product to control algae in ponds it will be classed as a biocide and will cost manufacturers thousands of pounds to prove it is safe to use, making it just too expensive to continue producing. But if they do not do this it will be illegal for retailers like garden centres and aquatic shops to sell the product so it will have to come off the shelves.

"It just seems frankly bonkers that tonnes of barley straw can be put into the water that eventually comes out of our taps to drink but we’ll no longer be able to put a small pouch of it into our garden ponds," said OATA Chief Executive Keith Davenport. 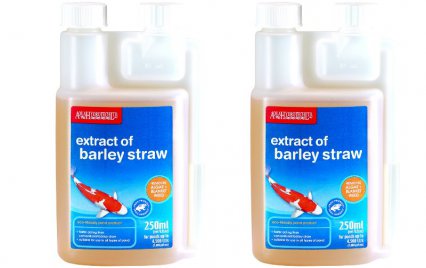 "We couldn’t believe it when we saw barley straw had been included in the new regulation because during discussions in 2005 officials in the European Commission said barley straw would be excluded when the new law was drawn up. But this hasn’t happened and it’s not even included in Annex 1 which lists products where a simplified authorisation procedure might be used.

"Manufacturers face a mountain of paperwork to prove this product is safe to use in a garden pond. It’s going to be just too expensive to do that which means from September it’ll be illegal to sell it. Yet the water companies can continue to put tonnes of barley straw into water reservoirs because they buy straw direct from farmers who are not selling it as a way to control algae. That simply doesn’t make sense."

With just a small window of opportunity to get the product removed before it becomes law OATA is lobbying the Health and Safety Executive, which has responsibility for enforcing the regulation. But with the summer approaching the trade association is worried there is not much time to mobilise support.

"We have asked our members to write to their MPs and we are also lobbying the Health and Safety Executive and the Minister for Business, Innovation and Skills. Including barley straw in this regulation is effectively strangling this product to death with red tape and it adds nothing to public safety, which is after all the intent behind the regulation."

When organic matter rots in water it produces chemicals which, when exposed to light, help to slow down the growth of algae which can choke up ponds and reservoirs. This process happens naturally in every body of water across the country but adding barley straw helps to speed up the process.