Research has demonstrated that coral larvae use the sounds of the reef to navigate their way back home.

It was previously discovered that reef fishes find their way back to the reef using sound as a cue, and this more recent discovery further highlights the problems that human activity can have on delicate reef systems.

Reef noises - which consist of pops and grunts made by fishes, sounds made by snapping shrimp and the sounds of animals feeding, moving and calling – can be drowned out by noise pollution from small boats, shipping, drilling, pile driving etc., drowning out the all-important natural reef noises.

If the coral larvae are unable to find the reef quickly and settle, then they will die. This could have dramatic consequences as corals are considered the building blocks of reefs, which are some of the most threatened ecosystems on the planet.

The Dutch team responsible for the research, conducted their experiments in Curaçao using the larvae of Montastraea faveolata that had been collected from a mass spawning event in 2008.  The team, led by Dr Mark Vermeij at the Carmabi Foundation, used transparent plexiglass cylinders dubbed "choice chambers" to conduct the experiments. 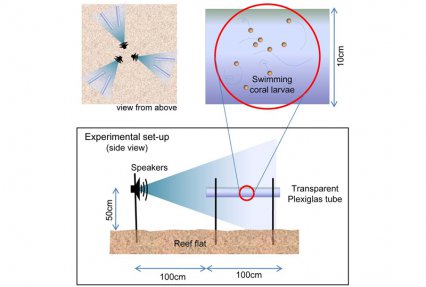 The coral larvae were placed in the choice chambers and a mixture of day and night reef noises were broadcast using underwater speakers.  The position of the tubes were moved to different heights from the source of sound to monitor the effects, with the end results showing that the coral larvae moved both horizontally and vertically towards the sounds broadcast by the speakers.

The study is the first to report a known behavioural response in the larvae of Cnidaria, which includes other invertebrates such as anemones, jellyfish and hydroids, to a water-bourne acoustic cue.  However, what is not known is exactly how the larvae detect the sound, one suggestion is that the larvae respond to the particle motion of sound using cilia (minute hair-like structures).