A baby Angel shark which was born prematurely last week is progressing well according to zoologists at Deep Sea World, Scotland's national aquarium.

Angel sharks are critically endangered. The 15cm/6" long pup, which was born on Friday, is the first baby angel shark to have been born in captivity in the UK.

It’s currently being looked after in a special isolation tank at the North Queensferry aquarium and staff are hopeful that more pups may be on the way in the coming weeks.

Deep Sea World Dive Officer, Tina Aydon, who assisted with the birth, said: "We are still at a very early stage but the pup survived those crucial first 24 hours and appears to be doing well and getting stronger day by day.

"Everyone is hoping for the best. Mum also seems to be fine. She gave birth to the first pup in a special holding pen but we have now released her back into the main display where she is under constant observation.

"If we get any signs of another pup being on its way we will take her back into the safety of the pen away from the unwanted attentions of the other sharks," she added.

In 2006 the Angel shark, which can grow to 2m in length, was declared extinct in the North Sea. At the same time its status was upgraded to Critically Endangered on the International Union for Conservation of Nature (IUCN) Red List of Threatened Species. 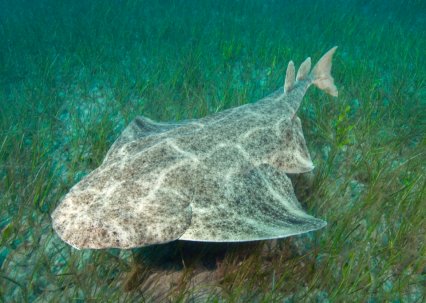 Angel sharks grow very slowly and mature only at a large size. The result is that very few reach maturity and breed resulting in an ever declining population.

They are also highly vulnerable to being caught as a by-catch through bottom trawls, set nets and bottom long lines. Historically they have also been used both fresh and dried salted for human consumption, and in the production of oil and fishmeal.