Aquatics Live - even bigger and better for 2012! Aquatics Live, the expo for fishkeepers that launched so successfully in November 2011, is shaping up for a terrific second year.

Many of last year’s stand holders at Aquatics Live, including Maidenhead Aquatics, Eheim and JBL, have signed up for the 2012 event with bigger stands, and some of the major industry players are joining them as new exhibitors.

Tetra lead the field in their position as headline sponsor and smaller companies are considering stands at the event to offer their specialist products to this great gathering of aquatics enthusiasts.

So popular was last year’s event that the organisers have moved the show to a bigger location at London Olympia. The West Hall is a brand new development which features a long glass wall and a much greater floor area, which will bring light and space to the event as well as scope to present bigger and more varied stands.

Feature areas this year will include a Reef Building Workshop, where Reef Eden International will demonstrate the latest labour-saving devices and methodology for setting up a marine tank, and following the success of the TMC stand last year (pictured below) there will also be an activity area for families. 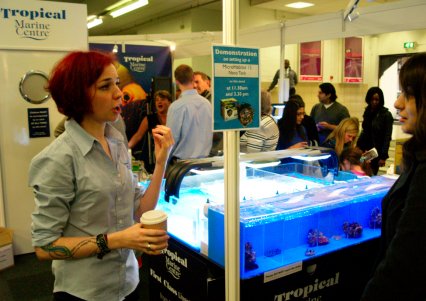 Crocodiles of the World will be back and Mark Amey of Ameyzoo will be displaying venomous snakes in the reptile section which will be more extensive than last year and go under the banner of Reptiles UK. And if you don’t like reptiles, don’t worry! You can see all the aquatics stands and features without ever encountering a snake!

The Clubs and Societies Village will be back, as will the ever-popular Aquascaping Activity Zone, organised by UKAPS. In addition to the competition for aquascapers the organisers are planning an 80-tank Discus Championship. This will be open to all hobbyists and breeders regardless of club affiliations, so start preparing your fish now! Entry details will be on the Aquatics Live website in due course.

Heiko Bleher and Chris Lukhaup will be returning to give new talks in the two seminar theatres and they will be joined by other celebrities from the aquatics world who have yet to be announced.

Planning an event like Aquatics Live takes time and the organisers still have a lot of irons in the fire. They will only release information as it’s confirmed so keep watching the PFK website and the Aquatics Live Facebook page for the latest updates.

We’re looking forward to participating in a great show which has already grown bigger and better than the event in 2011.

Aquatics Live will take place at London Olympia from November 10-11.