Excitement about Aquatics Live is building as more exhibitors sign up for the show at London Olympia on November 10-11 and plans begin to settle into place.

Tetra has designed a brand new interactive stand which is going to offer something for everyone, whether you’re an experienced fishkeeper or just starting out, and it has just agreed to sponsor the Discus Display.

Reef Eden International will be running the Reef Building Workshop and on its stand you’ll be able to see the latest developments from Cubic and Giesemann.

Maidenhead Aquatics, JBL and Eheim are all returning for the second year and they’re being joined by King British and Pets at Home who will be showing off the new facilities, plants and stocks which are being introduced in their stores.

Smaller stand holders who will be bringing some new and specialist elements to the event include Mark Evenden’s Devotedly Discus, Aqua Maniac and CE Fish Foods, who brought some great offers to the show in 2011.

Freshwatershrimp will be selling inverts as well as a great range of plants, and Ocean Aquarium will be coming with its range of Odyssea Aquatic products.

Sparsholt College will be back to tell you about the courses it has available in aquatics for 2013, cdVet has signed up from Furstenau in Germany to show its range of natural fish and water treatments and most recently, Reefschotz has taken a stand to show its concentrated live phytoplankton products and cultured live enriched copepods. It is also hoping to launch some new ranges and will be making some great exhibition-only offers!

Aquapress, OATA and the Big Fish Campaign will all be at the show with stands and in the Clubs and Associations Village you’ll find a wide range of species, displayed by their most enthusiastic supporters! Organisers are talking to more companies all the time, so watch this space or follow the show on Facebook for the latest exhibition news. 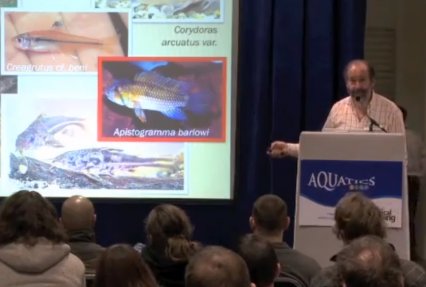 Joe Yaiullo, Curator of the Atlantis Aquarium in Long Island, New York, will be joining Heiko Bleher (pictured above at last year's event) and Chris Lukhaup as a headline speaker for the marine hobby, and Chris will also be holding informal sessions on his own stand. And following the success of his talks last year, James Starr-Marshall will be offering more inspiration and insights into aquascaping.

Seminars in the mornings will focus on novices and beginners and in the afternoons there will be talks for more experienced aquarists. At lunchtime on both days there will be Question and Answer sessions with a panel of experts.

If you want to make Aquatics Live a family day out, feature areas at the show will include the Marine Wildlife Roadshow, where there will be life-size inflatables of dolphins, sharks and whales to illustrate the talks on conservation, responsibility and sustainability, and a Family Activity Zone, where children will be able to take part in arts and crafts and have their faces painted in a variety of fishy disguises!

Discounted tickets are selling fast through the Aquatics Live website.

In 2011 Aquatics Live set a new standard for fishkeeping shows and this year, in a brand new venue with more stands and some fresh faces in the speaker line-up, the organisers are building on their success and bringing us a truly must-see event!