The show celebrates the nation’s obsession with pets and spoke with George Farmer after Practical Fishkeeping recommended they speak to him to show how good aquariums can look.

Farmer was interviewed on set next to the aquarium by presenters Liza Tarbuck and Huey Morgan, the Fun Loving Criminals frontman, along with a celebrity guest who is also a fishkeeper.

The tank was an opti-white open-top 80x45x55cm complete with overtank lighting and full glassware set-up and was planted with almost 100 pots of high-quality plants and stocked with ten adult Angelfish. The aquarium was set up on set in the BBC’s Wood Lane studios.

Farmer told PFK: “My biggest concern was ensuring the water was gin clear prior to filming, as we were on a tight schedule. Usually I let my tanks clear overnight prior to photographing but we only had a few hours.” 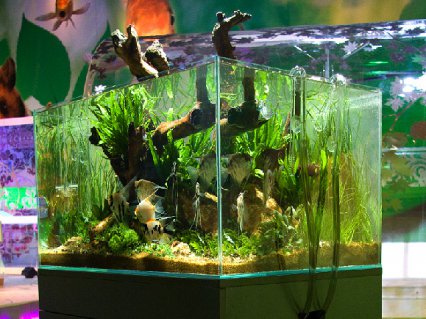 “We cleaned the coarse silica sand, petrified wood and Sumatra wood thoroughly prior to installation to minimise clouding. We then filled the tank slowly using hose, colander and plastic sheet draped over the aquascape. We used two large external filters filled with mechanical media and ultra-fine floss. The water was brought to temperature quickly and the fish settled within minutes. The whole process took just over two hours.”

“Everyone seemed really impressed by the finished set-up and at one point there was around 20 production staff around the tank admiring it.”

“I was assisted by fellow keen aquascapers Dan Crawford and James Starr-Marshall. We worked flawlessly as a team that allowed the full aquascape to be created in a relatively short time. James prepped the plants while Dan fitted all the aquarium equipment such as filters and CO2 gear. I set up the hardscape and substrate with creative guidance from James and Dan and we all began planting into the wet substrate."

"I had an idea of what the finish product would look like but it exceeded my already high expectations. Creating a mature-looking aquascaping instantly is a challenge but made easier with high density planting and decent hardscape.”

“I expect the aquascape feature will only last a few minutes during the actual broadcast but hope it inspires and creates as much interest as it did during filming. Aquascaping using live plants and natural materials was a new concept to many. The biggest reward was hearing a celebrity referring to what we do as living art.”

Liza and Huey’s Pet Nation is on Sky1 from Friday 26th March at 8pm.