The living kelp reef aquarium is at the centre of the Aberdeenshire attraction, which features marine life from the Moray Firth, Scotland’s largest bay. 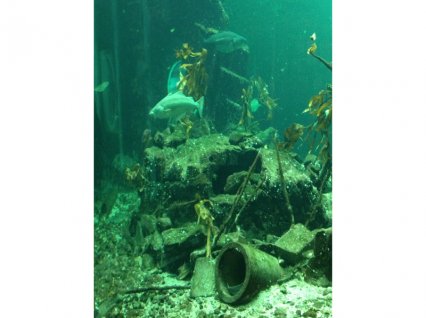 The cylindrical tank, which is 5m deep and open to the sky, has been suffering the effects of age for the past few years, with the fake rock features crumbling away. The fish had a heap of rubble to swim around instead of a beautiful reef (see picture above).

Thanks to some investment by Aberdeenshire Council, the aquarium team has been able to give the exhibit some much needed attention.

The biggest challenge was to undertake the refit with the tank full of 400,000 litres of water and nearly 100 fish, as the aquarium does not have the capacity to hold all the big cod, congers, wolf fish, wrasse, bass and other star exhibits.

First the team designed a new rocky theme and commissioned specialist aquarium building company Aquarium Technology Ltd - which had originally built the aquarium in 1996 –  construct several fake rock pinnacles that would be free-standing in the kelp tank. 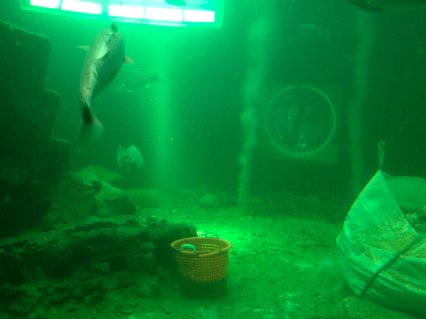 Then professional divers were called in to destroy the original rocks, chunk by chunk, and the rubble was craned out from the top of the tank – roughly eight tonnes was removed until the tank just had bare floors. 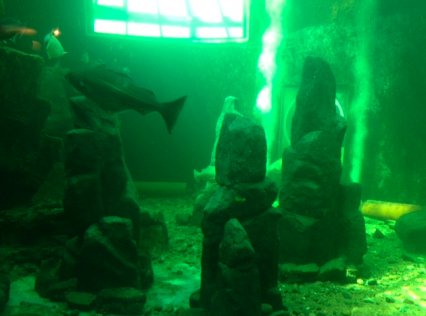 The high winds and dust storms then delayed the work for a week, but the new rock pinnacles arrived from Weymouth and finally a weather window allowed the cranes to lift the new rocks into the tank, where they were placed carefully by divers – at first the tank looked like an underwater Stonehenge (see above).

Aquarium manager Claire Matthews said: "It was a huge operation to undertake the kelp tank refit but everything went as well as it could have. The divers worked really hard to remove all the old rocks - wielding a sledgehammer underwater is no easy matter and all the while they had to worry about minimising disturbance to the fish.

"The commercial divers needed help from our aquarium diver to deal with Huffy Horace, our huge lobster, as he was refusing to move from his home! Otherwise the fish coped well with the murky water and our visitors were fascinated to see the operations.

"We’re delighted with the new look and the fish are certainly swimming actively and checking out the changes. A big thank you goes out to all who were involved and we’re very much looking forward to hearing what the visitors have to say."