For the 34th year the Catfish Study Group held its annual conference with three days of wining and dining and lectures by catfish specialists.

Based for the third year at the prestigious Kilhey Court Hotel in Wigan, Lancs., it was held from March 15-17. Over 50 guests stayed at the hotel and the Saturday evening dinner was booked by 70 catfish enthusiasts.

The exhibition hall was filled with stands by Mars Fishcare (Aquarian, Rena, API), New Era Fish Foods, BT Trading with accessories for fishkeepers, plus the wood carvings of Brian Walsh.

Catfish Study Group members had the traditional raffle stand, Breeders' Competition and Members’ Catfish Sales (pictured at the top of the page). 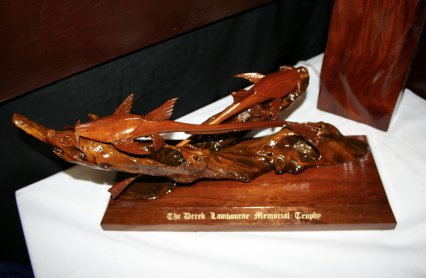 The CSG members also prepared a memorial display to their past President and Chairman Trevor (TJ) Morris and the famous breeder Alan Vaissiere. Judge John Cowan too was remembered – plus a special CSG Award called the Derek Lambourne Trophy (pictured above) carved by Brian Walsh.