Alligator gar gets a second chance in Illinois The Alligator gar (Atractosteus spatula) is being re-introduced into waterways in Illinois almost 20 years after it disappeared from the area.

This predatory fish is an ancient, primitive species with a 120-million-year history, but its large size — up to 3m/10' and 91kg/200 pounds — made it popular with fishermen who caught it easily in shallow backwaters and that, along with loss of habitat, led to numbers diminishing. The last confirmed catch in Illinois was in 1966, when a 2.13m/7' specimen was caught using hook and line. They were declared gone from the area in 1994. 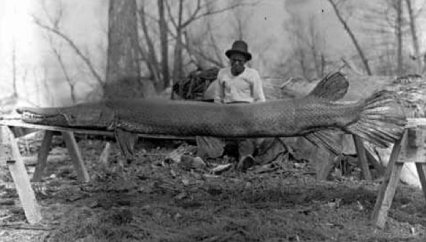 The fish are still found in the Lower Mississippi River Valley and Gulf Coast states of the Southern US and Mexico. Picture above Courtesy Dept. of Library Services, American Museum of Natural History.

The US Fish and Wildlife Service has been working with states along the Mississippi River to raise Alligator gar in hatcheries and re-introduce the fish to Illinois. The most recent release took place last month, with 650 young gar re-introduced into Little Sangamon River and Crane Lake.

It's also hoped these large-growing lie-in-wait ambush predators may help to combat the problem of invasive Asian carp. While it's thought doubtful the gar would have prevented the carp becoming established had they still been present in the area, they would probably have lessened their impact by keeping numbers down.

It takes 16 years or more for Alligator gar to mature, so it will be some time before it's known whether they're successfully reproducing in the waters of Illinois once more.