All quiet on the Bluefin front All quiet on the Bluefin front

As the first Bluefin auction of the year makes itself uncharacteristically inconspicuous, Nathan Hill asks whether marketing strategies have changed or if tuna has wriggled off the hook.

Japan’s Tsukiji Fish Market in Tokyo handles over 2,000 tonnes of marine catch every single day. It could, perhaps, claim to be the most famous fish market in the world. At the very least, it is the largest, and it boasts some of the most famous transactions. Annually, it hosts the Tsukiji tuna auctions, and the first auction of the calendar year attracts swathes of global media interest.

On a normal day, just 120 visitors are graced with a chance to witness the tuna auctions, offered on a first come, first served basis for early risers — of which there are always many. Applications start at 5am, continuing until two allocations of visitors — 60 per group — are filled. This year, up until January 18, the lucrative market is considered too busy to allow any visitors through the doors at all. Tuna buying is big business that doesn’t tolerate distractions at its peak.

What interest would the casual tourist have in witnessing a few fish sales? A spectacle like Tsukiji is more street theatre than typical trader haggling. It’s become tradition that the first tuna purchase of the year carries status for the buyer, while spectacular sums of money exchange hands and the patrons vie to outbid each other. 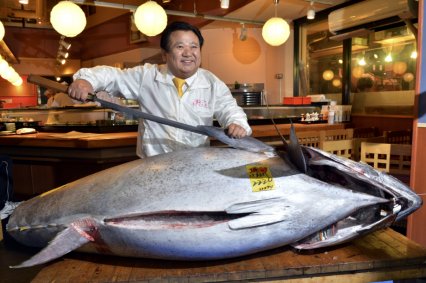 At this time in 2013, the media was whipping itself in to a frenzy over a colossal $1.76 million bid that secured a 222kg fish. The buyer, Kiyoshi Kimura (pictured above with his purchase) had also paid a record-setting price in 2012, shelling out $736,000 for 269kg of flesh. With figures like that, a sensationalist media sits up and takes note.

The staggering sums, skewed beyond sense or reason, are a matter for the bidders duelling for prestige to rationalise. An early prominent success carries with it the critical quality of undermining other buyers throughout the auction, with the winner showing that they have the assets available to purchase whatever the hell they want.

The invested money isn’t even recoverable through retail sales of the flesh to sushi-hungry Japanese punters. In any restaurant, a fish that cost $1.76 million would have to go out for around $350 a serving just to claw back the initial outlay. But the tuna doesn’t sell for that. It goes out at standard prices, eating into the restaurateur’s profits just as fast as the customers can gorge themselves on the flimsy fillets. What is really gained is the advertising pinned to the winds of the resulting media vortex. When the whole world’s talking about your expensive fish, your name is bandied around a lot of potential new customers, many of whom will want to discover first-hand what the fuss is all about.

Kiyoshi, owner of the Sushi Zanmai chain of sushi restaurants, won this year’s first-fish bidding war, as he has for the last three years running. On January 4, he became the proud owner of a 230kg Bluefin tuna for 'just' $70,000. That equates to around $305 per kilogram, which doesn’t make it the most expensive buy of the auction, just the first. Another fish, a smaller 168kg specimen, carried the more regal equivalent of $382 per kilo.

$70,000 sits closer to 2008’s sub-$56,000 bidding, and still grossly misrepresents the value of these fish. Despite the plummeting price and despite not receiving the hype of earlier showy profligacy, this value could be a significant indicator of where the Bluefin trade is headed, as some journalists seem eager to seize and ruminate over — or it might not.

What could cause such stagnation in such a shining example of bloated, runaway conspicuous consumption? Perhaps it was the conspicuousness itself. It’s hardly just a Chinese whisper that Bluefin tuna are endangered. It’s the fish at the top of most environmentalists’ 'to save' lists. These days it’s hard to buy so much as a can of Skipjack from a supermarket without getting at least one disapproving glance.

Look around and you’ll find stories of investors like Mitsubishi who banked on Bluefins becoming so rare that their deep-frozen, heavily guarded stockpiles would eventually inflate to hyper values. In some ways, nature had the final say on that episode of hoarding. Directly after the Tsunami that struck Japan in 2011, power for the freezers went down and many of those stockpiles were ruined. 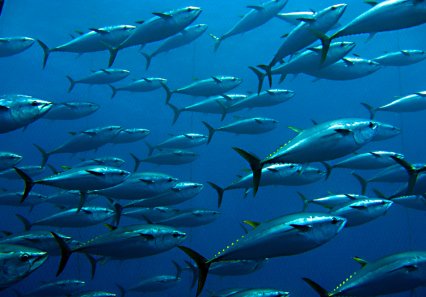 Maybe this year, with so much global focus on how much Bluefin stocks have declined — scientific committees now number the fish at just 4% of their unfished levels — Japanese fish buyers don’t want to draw attention to themselves. The country does, after all, account for 80% of the purchases of all Bluefin tuna caught globally, and the grandiose and exorbitant spends of last year drew heavy criticisms from a concerned mob of the environmentally minded.

Bluefin tuna are important stabilisers of pelagic ecosystems. Being large predators, they play vital roles in controlling the dangerously expansive populations of some smaller species, which could dominate if not eaten back into line. Predictions made about top-of-the-chain predator losses include the proliferation of nuisance species, such as the fleets of Jellyfish that have plagued fisherman and power stations — some of which we’re already experiencing.

I’d argue that the reasons for the price plunge might be much simpler, without the requirement for over analysis about what might or might not be happening. Two important factors bring welcome clarity to any speculation.

The first is that Kiyoshi’s long-standing auction rival, the restaurant chain Itamae Sushi, did not take part in the auction. It’s feasible enough that other bidders had no taste to engage on a price war for a price war’s sake. Without the usual sparring partner, there might have been nobody interested or affluent enough to take part in the extravagant pantomime.

The second is that this year’s tuna yield was more bounteous than last year’s. Inclement weather meant that for 2013’s auction, only four Bluefins were available from one supplier. This year, fishing from less tempestuous conditions resulted in an offering of around 30 tuna from each wholesaler. Add the two factors together in a straightforward calculation and it doesn’t take the wisest economist to realise that more supply, with less vociferous purchasers, does little to inflate prices.

Some question the veracity of the auctions, too. Reports circulate that there are no open bids on the day, but only prearranged transactions that are staged out, with the event acting to generate publicity for the buyers — and the restaurants — involved.

All of this detracts from the very important core issue: overfishing. With stocks depleted by up to 96%, Bluefin tuna are in no position to be subject to continued, aggressive harvesting. Any talk of the ‘value’ of the fish needs to be taken beyond the monetary or instrumental. What needs to be considered is what to charge for the chance to taste impending extinction: exactly what price can be thought fair for the privilege of eating the last of a whole food chain?

Unless the paying public come to respect the tuna’s inherent value in itself, it’s a safe prediction that we’ll all witness these magnificent fish vanish from both oceans and menus in tandem, and only then will certain communities come to understand that large predators are more desirable than jellyfish. Expensive or not, Bluefins are still in jeopardy, and that’s not set to change whether millionaire restaurant owners outbid each other or not.