Old style retail is never coming back, warns Nathan Hill. Buying habits and customers' expectations have changed - so aquatic retailers need to do the same.

Three things emerged in fishy news this week, none of which I'm going to write about in detail here. The first regards the increasingly endangered status of Arapaima in the wild, which have been declared extinct at multiple sites. This is depressing. The second involves the decline of valuable seagrass regions in our oceans on a scale analogous to the wholesale humo-consumption of rainforests. This is also depressing. The third involves firing salmon through a vacuum cannon over dams. This is just a bit mental, but it does at least come with a video. I'm sure there's a practical application to launching fish through elongated pea shooters for us somewhere, but right now, I honestly cannot fathom what it might be.

Instead, I'm going to harp on about a subject that was inspired by a new tank that I got this week. One of the freelance gigs I have involves immersing myself in supplements, and this means getting my hands wet; a little gonzo fishkeeping where I have to put my hands in my pocket for some goods, and beg, borrow or steal what else I can where I can. So far I'm getting on okay, and a contact of mine who took a gamble with online retailing has supplied me with an excellent entry level tank, delivered right to my door. As in, right to the door. I thought there was going to be a bit of a scrap about the pallet, which I didn't want, but in the event I think the driver saw the slightly untethered, sleep-lacking delirium in my eyes and took the thing away so we didn't have to stand in the road shouting at each other.

My family, who don't really get the whole writing gig, couldn't grasp the idea that I'd just made a few calls and arranged the thing to be sent out, and even now they're crooning about the place, measuring up gaps along walls and looking at the hunkering boxes in the corner like they're some kind of modern Trojan horse, packed with furious midgets who'll creep out at night and murder us in our sleep.

Anyway, this transaction got me thinking about the current play of retail, and I want to reiterate a point that might seem ten years or so out of date. Old style retail is never coming back. It's gone. Dead. It's going extinct at a rate faster than the Arapaima I didn't want to mention in the first paragraph. Only many of the shops I visit (incognito, I should add) haven't grasped this obvious concept, and staff languish behind the tills eagerly awaiting the introduction of some fictitious product that's going to drag the paying public back away from their laptops and iPads and into the stores, waving huge bundles of cash around and screaming 'shut up and take my money.' Bad news, guys. It ain't happening.

But that's not the whole story, I guess. The owners of some stores are doing just fine and dandy on the 'old school' approach. Hell, some of them I am lucky enough to count as close personal friends, and they do a superb job as ambassadors for the trade. But I also know how some of them are hoisting belts so tight that they could be models for Victorian era corsets. The clever ones make a comfortable enough living, but they work hard for it. Damned hard. And I think they know they're on something of a knife edge. 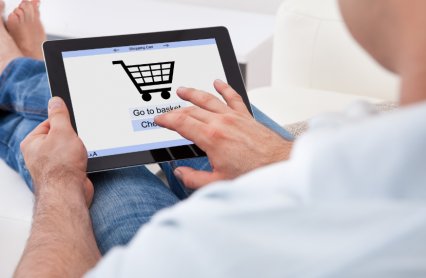 Here's the deal. Buying habits have changed. Expectations have changed. And I think that people on both sides of the retail arms race potentially have unrealistic demands. The buyer wants online prices. But by that, they seem to want brand-spank-me-in-the-kidneys-new gear for Ebay hand-me-down, grade ZZ, pigfeed only quality prices. Some of the retail giants — those hyper corporations that own more land in the UK than we customers do — have set the boundaries that everyone now expects. Customers want their cake, and by God they want to eat it, and then they want someone to shout at when it isn't proffered on a silver tray by street performing delivery drivers. Nowadays they expect someone to chew it up and spit it directly in to their pampered mouths.

Some retailers aren't doing themselves favours with obstinacy, either. I've noted a few of the old guard, stubbornly clinging on to a bygone era when a customer would come in with a problem, only to be offered a high cost solution. If you didn't like it — the mentality went — then you were welcome to go elsewhere. Which people now do. On their mobile phone, in your car park, when you've been particularly useless. A little tact and diplomacy goes a long way. That boorish nature that was so endearing in the mid-nineties is now a flagrant liability. 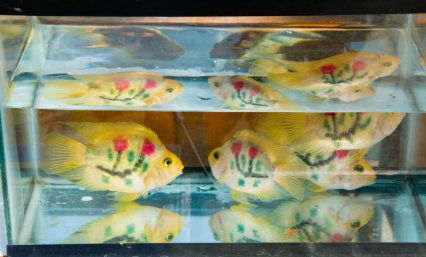 The question now is how we're going to find a happy medium. Because if we don't, this hobby's going to go downhill. It'll go downhill as bricks-and-mortar retailers cave in and let competitors have those parts of the trade that are no longer profitable for them — like tanks and cabinets. It'll go downhill when retailers need to crank up the prices of livestock in order to make ends meet, because the lines that used to keep them bobbing long — like tanks and cabinets — will be bought en-masse from the digital hypermarket. It'll go downhill because a retailer struggling to pay his bills, trying to feed his kids, and gradually getting more desperate will start thinking 'what the hell?' about stocking anything that'll make him a few extra quid, be that hybrids, Clarias, Pacu, Plecs, or even dyed and tattooed Parrrotfish. You've looked around recently, right? You can see these things inexorably creeping back in, right? I notice them, but then I'm paid to notice them. 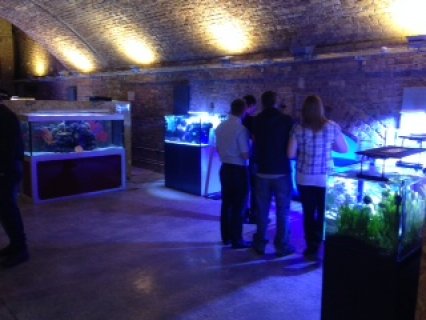 I could be chasing the wrong whitebait here, but I suspect the way forward for many stores is to start thinking about being more showroom. I think you know what I mean by that, too. The most successful stores I'm seeing these days are the ones that embrace a little of both worlds. Struth, just look at what Charterhouse achieved, with their displays boutique/ online business model.

Fill the store up with lovely looking pieces, and find some storage. That's the key word here, storage. Get a garage, attic, cellar, whatever, and get the sale stock in there. Let the customer know that they can have whatever they want the same day, delivered to their door. Or they can take it away with them. Manage your stock levels. The one thing that riles me to make an online purchase out of spite is being told that something isn't in stock, when I can see the damn thing. Don't tell me it's a display model; as far as I'm concerned, there's no such thing. If I'm in a store, I should be able to buy the shirt off of your back if I'm whistling the right price. If I want to pay hard cash for the till, then pull the tray out and let me have it.

Anyway. Stick to the old methods of sitting behind the counter, tutting and expecting the customers to come to you because they haven't a choice of shopping elsewhere, and you'll neither adapt nor survive. We'll be digging up your fossils in a decade or so at the latest. Stop waiting for the happy times to come back. They're not going to. You need to be seriously hot stuff to make traditional high street retail work now. And if you're not, there are plenty of charity shops lining up to take on your empty premises...

In the meantime, here's a thought for the paying public, too. How about letting your local stores know what it is you want? The retailer is constantly trying to second guess you, and every time you walk out disappointed, he or she will be scratching at their noggin trying to figure out what just went wrong. I know some of you already do, but I promise you, you're quite the (appreciated) minority. You'd be surprised just how much a responsible retailer will pay attention if you just politely note 'Hey, if you stocked (XyandZ) I'd buy some off of you...'

I seriously suggest we all start talking to each other, because this whole ostrich approach we're all taking is just just nosediving the trade and the hobby. Don't say I didn't warn you. This is really simple stuff, but everyone's pretending it's not happening.

Oh, and for anyone interested, here's the Salmon cannon video. Don't say I didn't warn you of this, either. In the meantime, I've got this new marine tank to set up...