A true festival of fish! This gorgeous Pearl cichlid, Geophagus brasiliensis, won the Supreme Final 2015 and the Best in Show at the British Open Final, at the Federation of British Aquatic Societies' (FBAS) Festival of Fishkeeping weekend. 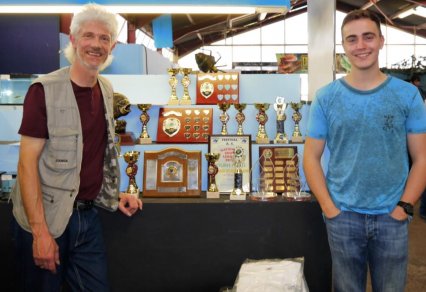 The owner of the fish, Alan Finnegan – with his son Jack – not only won these awards but also the second, third and fourth (and fifth and sixth!) in the Supreme Final (there were 51 entries). This is a success never known before in 27 years of holding the FBAS Festivals. Alan also won the 'highest pointed' in the Open Show (OS) and was awarded the FBAS Gold Brooch. His son Jack represented Leicester AS to collect the Highest Pointed Society Award too. 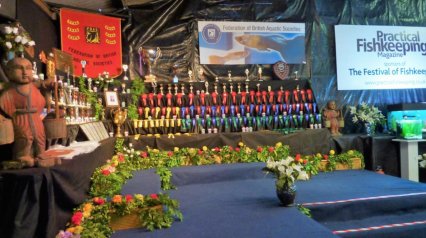 The Festival was held for the third year at the Hounslow Urban Farm — an interactive zoo next to Heathrow Airport. As before, the FBAS Chairman Joe Nethersell organised several marquees over the weekend of October 3–4, housing literally 1,000s of ornamental fish, 40 furnished aquariums, three ponds and several commercial businesses, for the Federation's grand final competitions. 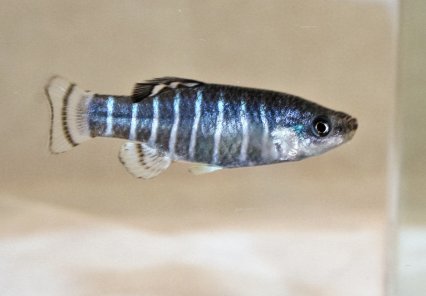 The only major award that Alan didn't win was the Diamond Class, which was taken by Roy Chapman of Southend and Leigh AS with a killifish — Aphanius danfordii — which is on the red list of endangered fishes. 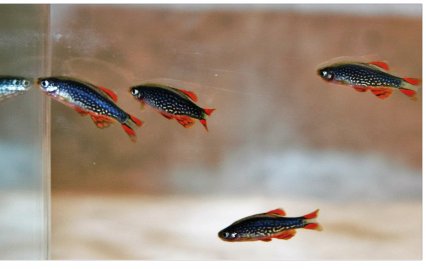 One other major award was the Supreme Breeders where a team of four fishes bred this year is judged. The winner was Tim Edwards (Tim's Fish Room) with his Celestial pearl danio, Danio margaritatus. 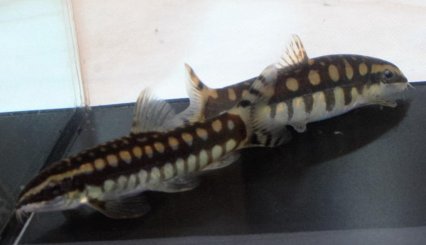 The Supreme Pairs (two breeder fishes) was won, of course, by Alan Finnigan, with his pair of Dwarf chain loach, Ambastaia sidthimunki.

The FBAS Festival of Fishes Weekend must be the world's most unusual fishkeeping show, with not only the FBAS pet fish but skinks and snakes, geckos and lizards, chameleons and tortoises, frogs, snails, scorpions...even tarantulas. 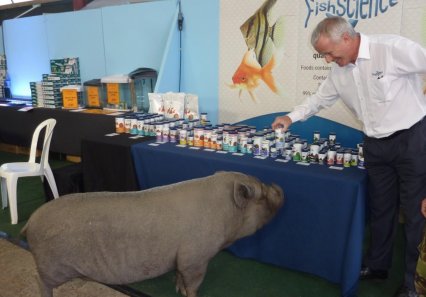 Parrots talk to you, and a micro pig (not that micro — it’s huge) walks around.
Beyond the FBAS marquees is the large petting zoo with animals of every kind. With cocks crowing, sheep bleating and over all the jet planes roar into their final landing every few seconds... 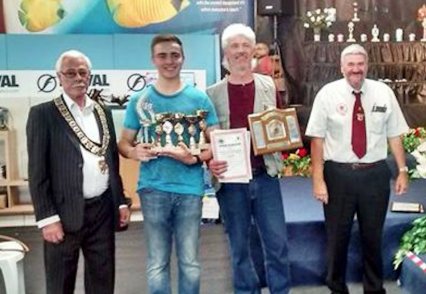 Do visit next year for an amazing experience or find a bargain if you are a fishkeeper. It will be an interesting year because the Chairman Joe Nethersell announced that after almost 50 years as Chairman or President he will be retiring at the FBAS AGM in December. But he will keep his interest in the FBAS Festival of Fishkeeping.
The above picture shows Joe in his chains of office with the Finnegans and the FBAS Judge (David Nice), who chose their Best Pairs.
Look out for details of the 2016 event in Practical Fishkeeping soon.
Why not take out a subscription to Practical Fishkeeping magazine? See our latest subscription offer.
Don't forget PFK is also available in digital format.
Click here for more information on the iPad or iPhone version.
Alternatively, click here for details of the Android version.