A new Open Show in Yorkshire! With Open Shows becoming rarer due to the closure of many fishkeeping clubs, the Bradford and District Aquarist Society decided to include a new OS alongside its spring auction, which took place last weekend.

For 67 years the BDAS — a member of the Yorkshire Association of Aquarist Societies (YAAS) — has held an annual Open Show in the autumn. Indeed, it will do so again in November 2014. It also holds an auction just for members in the spring — but this year it included an Open Show with the YAAS standards for their traditional 37 Classes. The plan is to repeat this new OS for three years and then decide if it is a success.

As always, the auction was very popular, with an audience of almost 100 audience buying fish, plants and accessories for many hours on Sunday, May 11.

In total there were 88 entries in most of those 37 Classes. For a first OS this is encouraging and 2015 should bring more Showers. 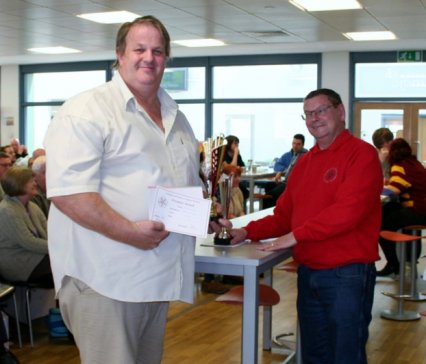 The Best in Show was a magnificent Siamese fighter (Betta splendens) with red and blue-green finnage — pictured at the top of the page — which earned 85 (and 2/3rds!) points for its owner Mike Kirkham of AAGB (shown above receiving the Best in Show Cup from BDAS Show Secretary Anthony Fisher). Mike owns 130 aquaria and shows Bettas internationally. 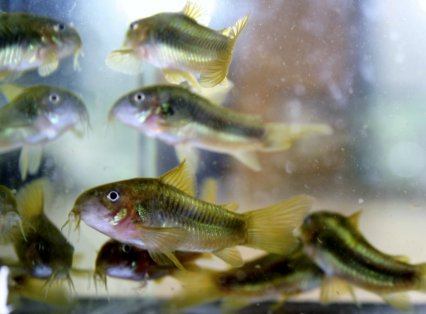 The Best Exhibit was a breeders' collection of six Corydoras — the Green Laser CWOO9. This won 85 points for Steve Bishop of Sheaf Valley (SVAS). Steve (pictured below with BDAS Show Secretary Anthony Fisher) is an expert on water quality and lectures on the subject, which must help produce such a lovely collection of Corydoras. 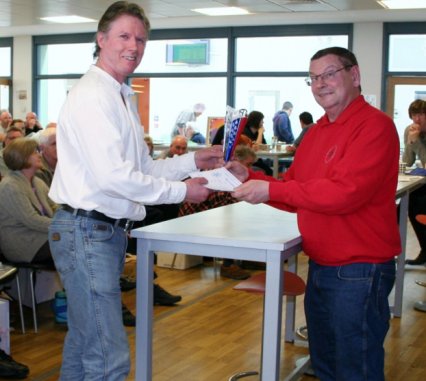 The venue for the BDAS shows is The Bradford Academy where a fully equipped kitchen gives hot and cold food all day and there's a large assembly hall for the auction. In an annex, the display tanks are placed on wheeled tables, which must be the best aquarium staging in the country!

The next Open Show will be in November — watch out for more details.