Scientists studying one of the most remote and unexplored tracts of rainforest left on Earth have documented an amazing richness of biodiversity, including new 60 species - 11 of which are fish - that may exist nowhere else on the planet.

Suriname is located in the Guiana Shield, a vast area in South America, which contains more than 25% of the world’s rainforest. The country has a relatively low population and still maintains 95% of its forest cover, but faces pressure from mining, road and dam projects.

The scientists collected data on water quality and an astonishing total of 1,378 species, including fishes, plants, beetles, amphibians, birds and mammals. Sixty species were identified as potentially new to science, including 11 fish, six frogs, one snake and many insects.

A Parotocinclus  sp. was collected in a tributary of the Upper Palumeu River. It has an unusual pigmentation pattern, similar to Microglanis catfish.

Other new finds included a South American darter and a three-barbelled catfish.

Fish were diverse and plentiful at the study sites, including many large fishes that are an important source of food for local people. The upper watersheds of Southeast Suriname may also provide important spawning grounds for migratory fishes people throughout Suriname depend upon.

Among the key findings is the importance of fresh water in the region. The area’s mountain ranges contain the headwaters of some of the largest rivers in Suriname, providing vital water for transportation, food (especially fish), drinking and sanitation for approximately 50,000 people in the surrounding areas as well as along the river and as far as Paramaribo, the country’s capital near the Atlantic coast.

These headwaters also support downstream energy production, agriculture and other economic activities. CI scientists found that while other parts of Suriname are likely to become drier, Southeast Suriname will be most resilient to climate change, and is therefore disproportionately important for ensuring sustainable flows of water in the future. Ensuring these forested headwaters remain intact is vital for the country’s people and economy, and a future resource for the region and the world.

"Suriname is one of the last places where an opportunity still exists to conserve massive tracts of untouched forest and pristine rivers where biodiversity is thriving. Ensuring the preservation of these ecosystems is not only vital for the Surinamese people, but may help the world to meet its growing demand for food and water as well as reducing the impacts of climate change," said Dr. Trond Larsen, a tropical ecologist and Director of the Rapid Assessment Program at Conservation International. 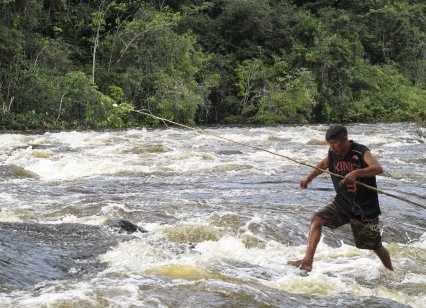 The team surveyed four sites in the upper Palumeu River watershed, going from low floodplains to isolated mountain peaks. They received invaluable support from 30 indigenous men from nearby communities, who went ahead in boats through dangerous rapids to help bring 2,000 kilos of food and equipment, set up campsites, cook meals and guide the team through the forests.

Water samples showed high quality water conditions overall, although some had high mercury levels despite no upstream mining. "The mercury is probably blowing in from mining and industrial activities in neighbouring countries. This demonstrates that even remote places are interconnected and susceptible to activities in other countries", explained Dr. Larsen. 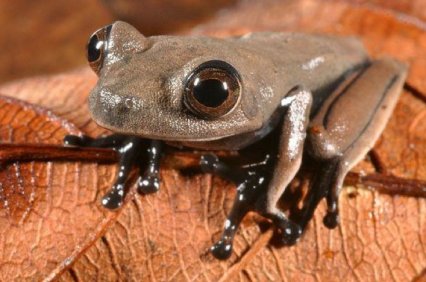 "With over 100 species of frogs likely gone extinct over just the last three decades, the discovery of this new species is especially heartening," said Dr. Larsen.