Tabloid newspapers regularly feature the amorous exploits of celebrities, but these fish can give our "A listers" an athletic run for their money, writes Nicolette Craig.

Sex for sharks is pretty violent. Courtship can be highly complex and in larger species usually involves females being bitten hard enough to leave permanent scars. In many cases the females have evolved thicker skins to cope. The male holds the female in place by biting her and then inserting his clasper, which is covered with spines and spikes, to hold it in place as they swim together. Even when a successful mating is completed the development of young is not gentle, with some embryos sometimes eating their weaker siblings inside the womb.

Hammerhead shark has sex on its own 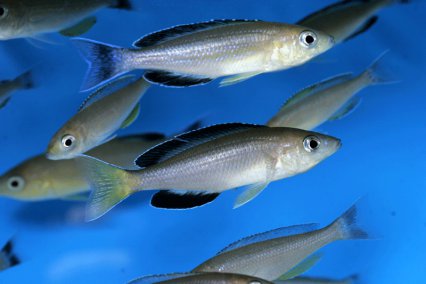 Cichlids have unusual sexual practises. The Cyprichromis species in Lake Tanganyika form huge groups, some of many thousands of individuals. They co-ordinate breeding so that all males release their sperm simultaneously, creating a huge cloud of semen. The females face down while releasing their eggs then swim down, collect the eggs in their mouths and swim up to be fertilised by the cloud.

After hatching, the offspring will stay inside the mouth of their mother for some three more weeks more until independent and ready to form their own school. By forming huge groups, the cichlids ensure that they never have to waste energy competing with other fish over suitable spawning sites. They can spawn anywhere.

See also: How do Cyprichromis breed in the wild? 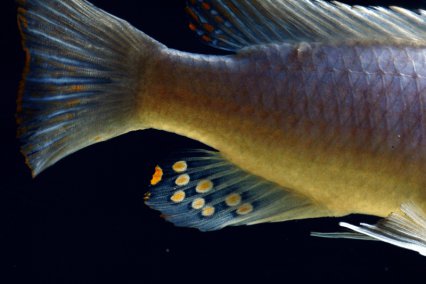 Many cichlids are mouthbrooders, meaning they lay their eggs and scoop them into their mouths to protect them from predators. Males of the same species have "egg dummies" or "egg spots" on their fins which they place near the spawning site.

The female will think that she has not picked up some eggs and will try to pick them up as well at which point the male will fertilise all the eggs in her mouth. 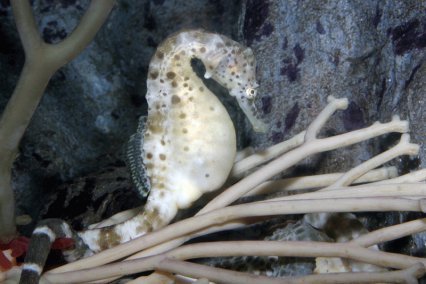 The seahorse raises the flag for equality. They form strong pair bonds which are usually monogamous. Each morning male and female greet each other with an elaborate courtship dance and then part for the day. When ready to mate the female places her ovipositor into a pouch on the male's body and lays her eggs. The male then fertilises them and the eggs then embed into the wall of the pouch.

They are washed with a fluid which bathes the eggs with nutrients and oxygen and removes waste products; much like the mammalian placenta. After two to four weeks the male "gives birth", a process involving much pushing and lasting many hours  to anything up to 1,500 young. Although there are other instances of parental and paternal care among fish, this is the most extreme. 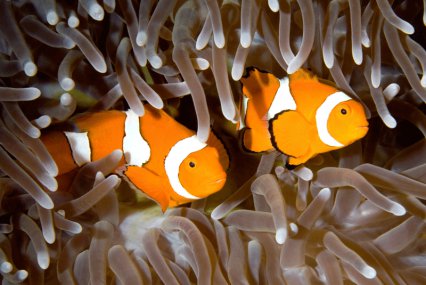 All anemone fish or clownfish, like the popular Percula clown are born male and remain so until mature, when they can potentially become female. Usually, Amphiprion lives in large groups each of a single large female, one slightly smaller male and the rest immature males. They live in a symbiotic relationship with anemones they use as spawning sites and as protection against predators.

Only the large male and female will breed as they are monogamous and have a strong pair bond. Then something happens to the female. If she dies, rather than looking for a replacement or pining away, the next largest male simply changes sex to become a female. Then the couple can start mating again! 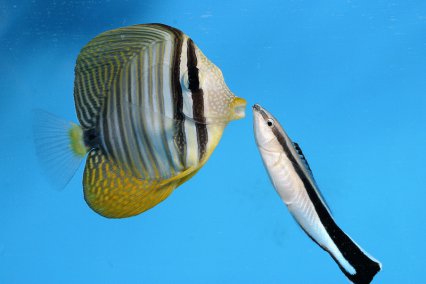 Many coral reef fish are sequential hermaphrodites: possessing both sets of reproductive organs but only really using one set at a time. Prime examples include wrasse and parrotfish, and these form harems with one large male and lots of smaller females. At spawning time the male releases a huge cloud of sperm as the females release their eggs, so fertilising all the eggs at once.

Some smaller males hang around, which would seem unexpected in this kind of group, but they sneak around and release their sperm at the same time as the large male - so fertilising at least some of the female's eggs. When the large male dies, the next largest female takes over and gradually turns into the breeding male.

In Cleaner wrasse this transformation is complete within a week. In contrast, many goby species are protogynous fish, meaning they can't choose which sex to be! Put them with a larger female, and they will become male. Plop down a bigger, meaner male, and this goby turns back into a female. 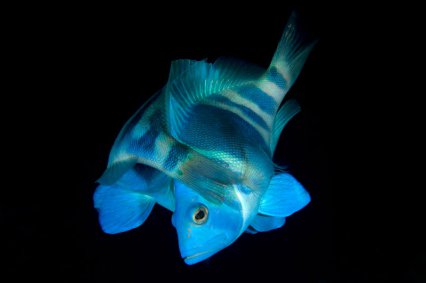 Hamlets are synchronous or simultaneous hermaphrodites which means that when mature they have working versions of both sets of reproductive organs. They do not self-fertilise but can swap sexes when encountering another fish of the same species.

Following a long courtship, they take turns to release small packets of eggs for other fish to fertilise. They can shift sex back and forth every 30 seconds with up to 14 spawns in a single day. They start off with one fish releasing eggs and the other fertilising them, and then break apart to come back in opposing roles. 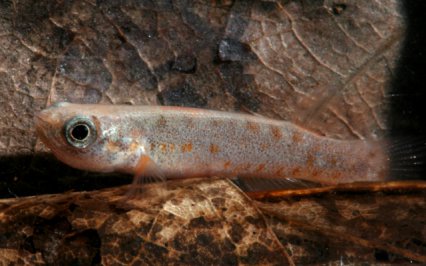 In the absence of a suitable mate, it would be convenient to be able to fertilise yourself. This is rare in vertebrates but there have been recorded cases of shark parthenogenesis where females have produced a single female pup without a male.

The Caribbean or Mangrove killifish, Kryptolebias marmoratus, is however the only real example of an actual reproductive strategy. There are no females at birth and only 5% are male, the rest are hermaphroditic with both male and female reproductive systems. Reproduction occurs internally when the sperm fertilised the ovulated eggs.

After some embryonic development, the eggs are released.

The ecology of the killifish looks to hold the answer as to why only this fish chooses "DIY" over standard sexual reproduction. These fish live in extreme conditions in the mangroves where water can dry up completely, or they can be flooded with freshwater. As a consequence, these fish can survive long periods of drought by hiding in rotten tree stumps and breathing through their skin. This extreme lifestyle means they are unlikely to come across a mate and are therefore forced to go it alone. 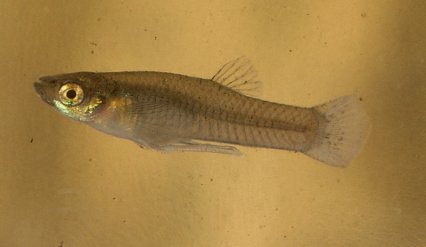 Size is a problem

The mosquito fish, unlike egg laying fish, are livebearers and males have an organ known as a gonopodium used to internally fertilise the female in much the same way a penis does. Females are not keen on mating and will fight all but the most well endowed males, so mating can be tricky.

The problems don't end here though, as having extraordinary genitalia also slows males down, making them less able to manoeuvre and so vulnerable to predators. 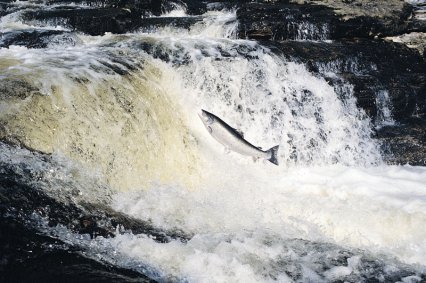 The story of salmon is of epic reproduction. They are born in fresh water and swim to the open sea as young in their hundreds of thousands. After a few years, when matured, they use an extremely well developed sense of smell to return to the stream where they were born, sometimes swimming thousands of miles.

On their return to the fresh water they stop eating and their digestive system starts to atrophy as it is no longer needed. From now on they live on fat accumulated during their time in the ocean. Their physiology changes to cope with the large amounts of freshwater their body is taking in, as they become bloated and continuously urinate to rid their bodies of the extra water.

The males in particular alter their body shape, developing a hooked snout, long fangs, a humped back and intense coloration. By following a unique scent the salmon journey upstream until they reach almost the exact stretch of water they were born in. This may involve jumping waterfalls and negotiating obstacles in a kind of fishy Krypton Factor! Only the fittest make it to the spawning grounds where the males fight fiercely for the best territories, grabbing each other with their jaws and striking out with their fangs.

When the females arrive the winning males and females release their eggs, which can number two to ten thousand, and sperm into a kind of nest made in the gravel and cover them over. After this the salmon's job is complete, their scales fall off, their muscles dwindle and they die soon after. A female may guard her eggs for a week or two, but becomes weaker every day as she can no longer feed. When the eggs hatch three to four months later the circle of life begins again as the young make their way to the ocean However, the male salmon uses another strategy to reproduce - the precocious stay behind.

These are barely one hundredth the size of fully grown males, as they are only a few months old, but are sexually mature and will not make the journey to the sea. These males prefer the relative safety of the stream. They hide behind rocks and sneak in to fertilise eggs while the large mature males are fighting. This method fertilises just enough eggs to ensure that the life history tactic stays alive in salmon populations and means the "sneaky gene" lives to see another day. 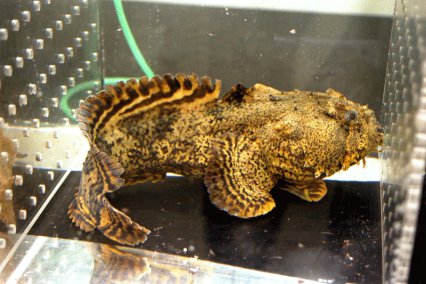 Consider the toadfish - a fish so loud in its spawning that residents in San Francisco Bay were kept awake by what they thought was the humming of an electricity line. The noise appeared once a year and was so loud they planned to sue the electricity company.

In fact, it was made by the male toadfish vibrating a muscle on his swimbladder to attract the female with a noise similar to a foghorn. The female swims towards the male and when he grabs her in his jaws they retreat to a suitable crevice to spawn in private. Residents of the bay now celebrate this event with an annual festival...

Deep sea Angler fish of the family Ceratiidae live in complete darkness more than two miles below the surface, in crushing pressure and temperatures close to freezing.

When ready to mate, females grow lures which contain luminescent bacteria. This glow attracts both food and potential mates. While females are not known for their beauty males have large eyes and a disproportionately large nose, both of which are used to track down his mate.

This is a matter of life or death, as by this time his digestive system has atrophied, he is unable to eat and will die within three months if he doesn't find a female. Once he has found a partner the male bites her, drinks her blood and then releases an enzyme which digests his mouth and her body so they become fused at the blood vessel level.

His body then wastes away, leaving nothing but a pair of gonads which release sperm in response to hormones in the female's blood, indicating egg release.

This means that the female always has a mate when ready to spawn, and some have been recorded having up to six males attached to their bodies.