Here's the last lesson of week three of the Practical Fishkeeping Aquarist Diploma. Next week, we cover disease management. 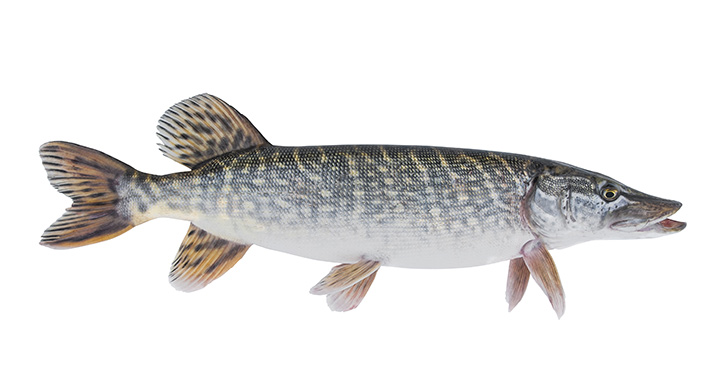 Fish have a body shape optimally evolved to the habitat they live in, and the type of lifestyle they pursue.

Fish that move about lots, or swim through moving water are usually a hydrodynamic fusiform or torpediform shape, tapering at each end and streamlined.

Fish that live in crevices, or explore confided spaces often have a cyclindrical or filiform (eel shaped) body. Smaller fish may even be vermiform (worm shaped) to help them bury in soft substrates. 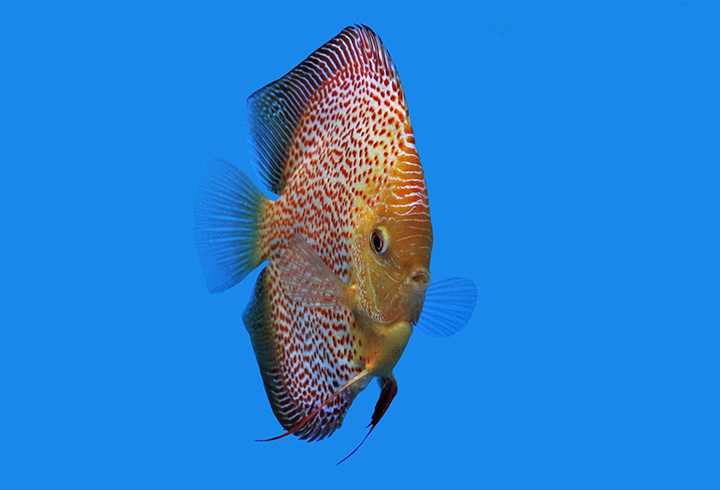 Fish from slow habitats are sometimes compressed and laterally thin, such as Discus and Angelfish are. They do not need powerful bodies for endurance swimming, but are able to change direction quickly, evading predators.

Fish in torrential rivers are often ventrally flattened with flat bellies, to present as little resistance as possible to water as they hug to substrates. They may even have adapted fins or mouthparts that act as suction cups, helping secure them to rocks.

Fish mouths are positioned according to where they feed from.

Terminal mouths are positioned at the front of the fish, facing straight ahead. A fish with such a mouth can eat from all levels, and often finds its food in midwater.

Superior mouths are upwards pointing, such as those on Mollies. Fish with superior mouths feed mainly from the surface and will struggle to eat food once it sinks down past them.

Inferior mouths point downwards and are slung underneath the fish, as in most catfish. Fish with an inferior mouth need to wait for food to reach the substrate before they can eat it. Some catfish have devised ways of swimming upside down in order to access food from the water’s surface. 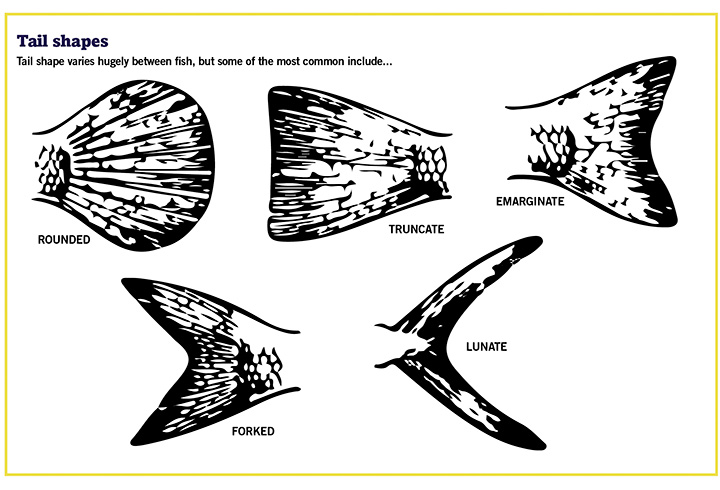 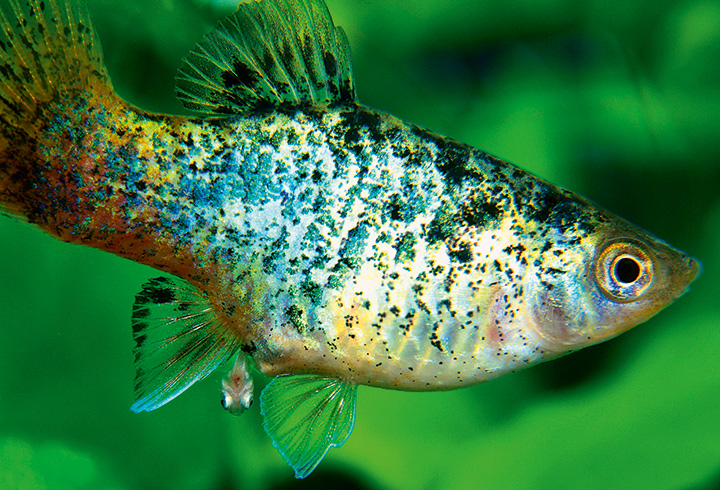 Egg laying fish make up the majority of species. Most aquarium species are ovuliparous, which means that the female lays eggs that are then fertilised by the male outside of her body. With ovuliparous fish, the female will lay her eggs, and the male will then follow her, fertilising them by depositing his sperm straight on to them.

Less common are oviparous fish, where the eggs are fertilised inside the female and then laid afterwards. Some sharks and rays do this.

Livebearing fish in aquaria are, with rare exceptions, ovoviviparous. Guppies, platies and mollies are all good examples, where the male fish fertilises the eggs inside the female, but she retains them inside her as they develop. Aside providing some oxygen for them, the female provides no further nutrients. The eggs feed on the yolks sacs they had as eggs, and when fully formed the female will release the swimming young directly in to the water to fend for themselves. Another word for this type of reproduction is ‘aplacental viviparity’.

Another, rarer type of livebearing in fish is viviparity, where eggs are fertilised internally, but then receive nutrients either as tissue or blood from the mother. Some halfbeaks, seahorse and marine sharks use this form of reproduction.

Fish can be either gonochoristic or hermaphroditic.

Gonochoristic fish are those with clearly defined males and females, and never change sex throughout their lives. 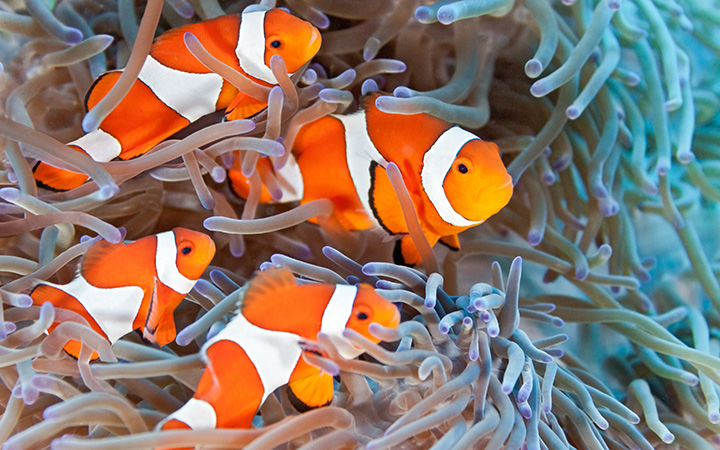 Hermaphroditic fish may switch sex at some stage of their life. This process is usually sequential, meaning that the fish starts life as one sex and later transforms into the other.

Fish that start their lives female and transform into a male are said to be protogynous. Many marine wrasses behave this way.

Fish that start their lives male and later transform to female are said to be protrandrous. Marine Clownfish are perfect examples of this. 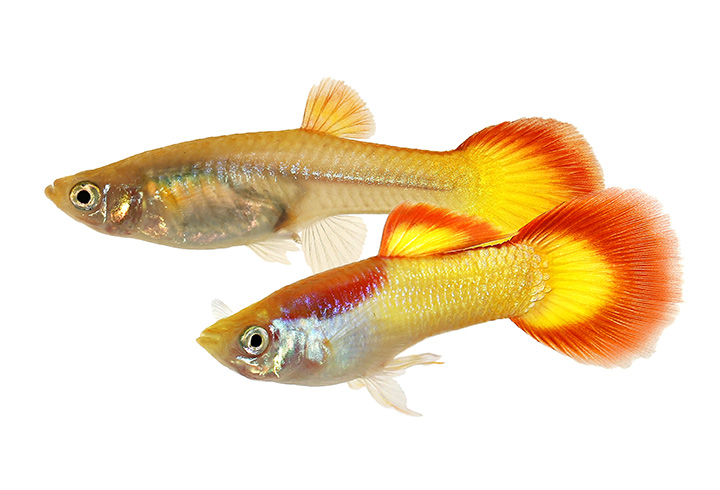 Fish will often display sexual differences between males and females.

In livebearing fish such as guppies, there are clear primary sexual characteristics – differences between the sexes that are directly involved in reproduction. 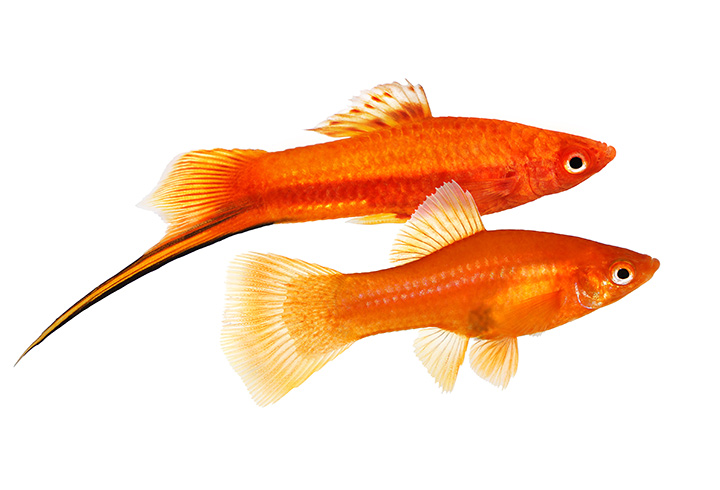 What defines male and female?

The gender of a sexually reproducing organism is defined by the size of the sex cells. The organism with the larger sex cell is the female, while the smaller sex cells are those of the male.

That’s it for week three. Next module: Disease management

Click here for next lesson: Stress and environmental diseases