What’s causing this white ‘powder’ in my tank? A reader asks if tap water is causing the silt build up in her tank.

Every time I carry out a water change  of 25% or more, overnight my plants, glass and heaters become covered in a white powdery substance which tends to disappear after a few days. Could this be something to do with my tap water? I always treat it with conditioner before adding it. The temperature in the aquarium is 25°C, pH is 7.3 and all water parameters are fine.

Neale says: It’s hard to be exactly sure from the photo, but my first thought is plain vanilla silt. Silt is, of course, the finest particles that make up the substrate or soil in any given habitat. In aquaria, the most common source of silt is sand — unless cleaned scrupulously well, most bagged sands include a certain percentage of silt. Disturbing the substrate, for example when cleaning the tank, causes the silt to rise into the water column. Over the next few days, it settles out again, but can get trapped anywhere there’s a microbial film. This can include the glass walls of the tank and the leaves of plants.
It can also attach to the slime trails left by snails, and even on the mucous of fish. In itself it doesn’t do any harm, but in excess it can irritate fish and will certainly block some light from reaching the photosynthetic cells within plant leaves.

Once the silt’s in the tank, there are two ways to remove it. One is to improve mechanical filtration. Canister filters often contain three types of media: biological, chemical, and mechanical. Biological media hold the bacteria, and in many cases, this type of media takes up the entire filter cartridge. Chemical media are less often used today than in the past, but include things that change the water through chemical reactions of some sort. Activated carbon, zeolite, and peat are all examples of popular chemical media. Finally, there’s mechanical media. This is the stuff that’s meant to remove solid particles from the water, restoring its clarity. In canister filters, a fine sponge or a wad of filter floss might be used for this. 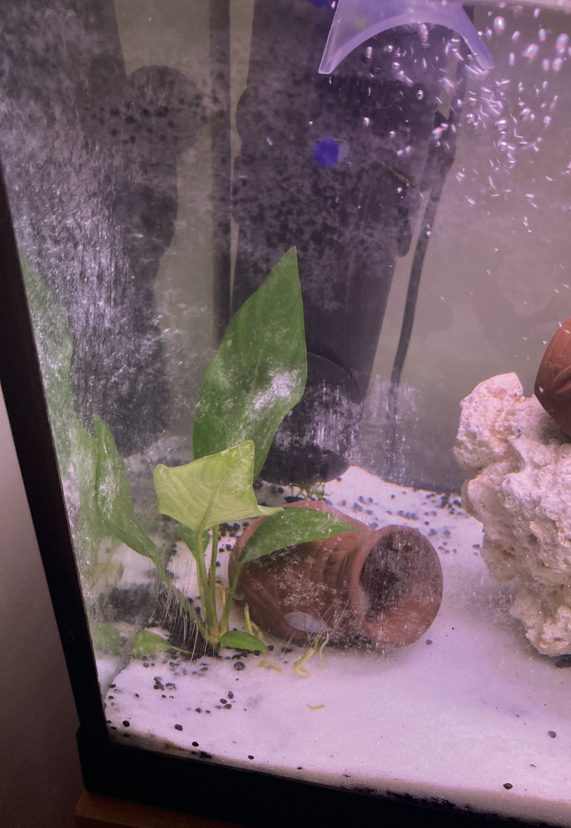 Biofilm may be causing silt to cling to glass.

In practice, a lot of aquarists ignore the difference between the biological and mechanical media, and many popular filter media are designed to do both jobs reasonably well. However, if you’re finding the water isn’t staying clear between water changes, adding an extra fine sponge or a wad of filter wool can make a difference. Traditionally, these are placed at the end of the water’s journey through the filter, on the assumption that the biological media can be left to trap the bigger solid waste particles, so by the time the water passes through the fine filter media, all that’s being trapped is the silt, giving the water a final polish.

The other way to minimise silt is to use a product called a filter aid, such as Seachem Clarity. These clump the silt particles together, making it easier for the filter media to remove them. Don’t confuse these with products that improve filter performance by encouraging the growth of the nitrifying bacteria.

The way the silt is distributed in your tank is interesting. On the glass, my guess is that the silt is sticking to diatoms. Try wiping down the glass with a sponge before you do a water change, and then looking to see if the glass stays cleaner. The patches on the plant also suggests a film of algae. If the plant is an Anubias, it’s worth remembering that these should never be planted in the substrate. The green rhizome (the horizontal stem-like structure the leaves grow from) needs to be above the substrate, and ideally tied to something like a small piece of wood or rock. Roots will eventually grow into the substrate, but generally when pushed into the substrate will eventually die and rot away. Anubias does best receiving indirect light, shaded through some floating leaves, ideally exposed to a brisk current that’ll keep its leaves nice and clean.