How do I worm my fish safely? Did a Fork tailed blue eye introduce something nasty? Image by Alamy.

Dr Peter Burgess advises a reader who is having issues with worming their fish safely.

I have a heavily planted 120 l tank with around 15 Amano and Red cherry shrimp, five false Julie corys and one surviving Fork tailed blue eye. The blue eye was once one of eight along with two elderly but much loved guppies — until I was foolish enough to add a few more blue eyes straight into the tank.

Fairly early on it seemed that two of the new fish weren't happy and seemed to not be eating. Then came a period of regularly dead fish and much desperate searching for cause and diagnose.

Eventually we realised we had Camallanus worms. Treatment seems to be a nightmare and the Internet is full of confusion, with lots of sites recommending treatments that don't seem to be available in the UK or advising bird dewormers which I'm hesitant about.

I understand the dewormer would kill my shrimp and some sources seem to say corys might struggle too. Should I move the shrimp and risk the corys (they don't seem to have any signs of infection)? Can the shrimp carry the infestation and re infect the tank? Is there a different medicine I should be using?

A) DR PETER BURGESS REPLIES: You don’t mention how you arrived at your diagnosis of Camallanus. Diagnosis requires the observation of one or more red-brown worms (up to 2cm/0.8in long) protruding from the fish’s vent, or the discovery of the worms within the gut of a dead fish. 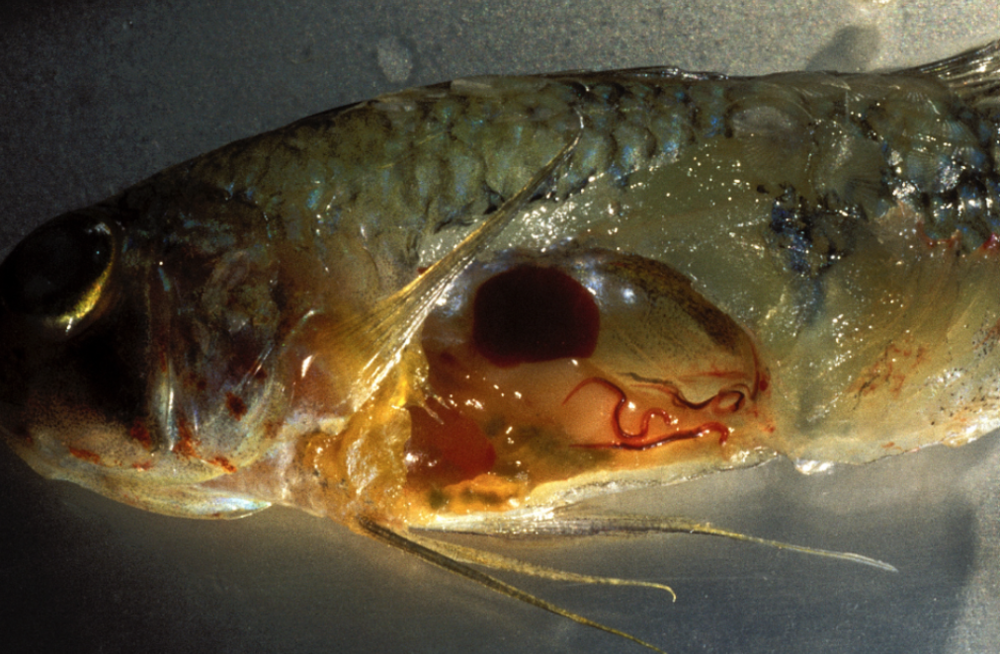 Camallanus worms in the gut of a fish.

Assuming you have observed the actual worms, then we need to consider a few points about Camallanus infections: there are several species of Camallanus and they infest various freshwater fishes, including guppies. Living within the fish’s gut, these worms remain out of sight — so you may not have detected them even if you had quarantined your new fish (although quarantine is always a good idea). Generally, it is only when one or more female worms protrude from the fish’s vent to shed their larvae that a Camallanus problem is discovered. Low numbers of worms in the gut may cause no obvious disease signs but heavy infestations can lead to body wastage and can be fatal.

Fish acquire Camallanus through eating worm-infested copepods (tiny crustacean relatives of water-fleas, sometimes sold as live food).  In the case of Camallanus cotti (which infests guppies, Betta, and other species), some experts believe that fish can additionally pick up this worm directly, by ingesting free-living worm larvae in the water. There is no evidence, to my knowledge, that shrimps will harbour Camallanus.

As for treatment — and this assumes you have a confirmed diagnosis of Camallanus — I would choose one of the commercial fish wormers that contains either Flubendazole or Fenbendazole as the active ingredient. These wormers are reportedly toxic to shrimps so you will, unfortunately, have to treat all your fish (including the corys) in an isolation tank — I suggest isolating them for four weeks. You may need to re-dose every week or so during this isolation period — but follow the manufacturer’s instructions.