Create a home fit for the king of fish with Nathan Hill's step-by-step guide.

Not only has the discus long been revered as the king of fishes, with a wealth of literature dedicated to its name, but Stendker discus could quite rightfully claim to be the pinnacles of royal bloodlines. These are fish that have been groomed for their place within the aquatic monarchy.

With many desirable species, there’s a trade off; beauty is often difficult to maintain. Or at least it used to be, and that’s why discus keepers were for so many years regarded with a kind of reverence. Discus were always demanding fish, requiring exacting water conditions and near clinical care. To take them on was to divert huge tracts of energy into their upkeep, with frequent water changes from trusted supplies.

Price affects how craved a fish is, and discus have always, without respite, commanded hefty fees. In the early days, back when a pint of beer would cost you pennies, they could sit at prices in excess of £100 a fish. Early keepers, prepared to splash out such a sum and then invest so much in maintenance, moved themselves into the 'elite' of aquarists if for nothing more than wanton spending. Discus were the Bentleys or Ferraris of the fish world.

Today, quality breeding pairs can set you back well in excess of £250 and it’s rare to find young fish for under £15 each. Mass farming techniques have all but destroyed the bloodlines and value of some and drastically improved others. 'Budget' discus, found with kinked backs, black splatters (or sooting), irregular markings and growth deficiencies, may still sell for above their worth.

Wild discus, when available, attract a fervent audience, but are not a straightforward proposition. Advances in technology now mean that we can access RO water, blackwater supplements and an abundance of other disus-esque wares, but the fish themselves can be inherently nervous, temperamental and twitchy.

Wild caught fish can be notoriously hard to settle, especially at adult sizes. They shock easily in reaction to startling sights and sounds, and also to water. They tend to require extra attention that other discus might not, such as meticulous deworming or control of other pathogens.

Some keepers still extol the virtues of wild. They are, it is reported, less aggressive and less snide with each other than tank bred species. Though harder to breed initially, they form strong parental bonds with the young and feed them well.

I’ve been on the fence with wild discus for ages. Every one I spot in stores is a brief love affair that I have to force myself to walk away from. My reservation with farmed or tank bred discus is how they can lack that 'natural' feel. They often appear excessively 'manicured' as though too comfortable with their noble status within the hobby. They often lack the rugged appearance of wild fish. Then I saw the Stendker Santarem discus and all of that went out the window. 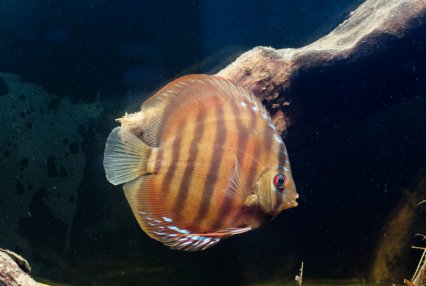 Stendker discus come in abundant forms. Many of the varieties are far removed from anything we’d recognise as a wild type; instead, they tend to be rich, solid blocks of colour, such as the Cobalt or Marlboro varieties.

That’s superb for a discus aficionado but doesn’t fit my manifesto. With fetishes for biotopes and wilderness medleys, I like to look into a tank and imagine I’m glancing into a river.

Discussing this concern with Mark Evenden of Devotedly Discus in Polegate, East Sussex, he suggested one of two Stendker strains: Alenquer or Santarem.

My Santarem fish have never seen the Amazon and may never have even witnessed décor beyond a ceramic tube. When farmed or bred en masse, they are kept in near barren conditions with simple filtration and substrate-free bases. Wild discus come from dark, often tannin-rich waters with filthy sandy bases, and tangles of wood. It was the latter that I wanted.

I opted for an Aqua One Eurostyle 120 Aquarium package, with dimensions of 120 x 45 x 64cm/47 x 18 x 25" and a 300 l/66 gal volume. This presented opportunities to create set regions of the tank to suit the fish’s moods, whether shy or bold. Filtration is the 1,400lph Aqua One Advance 1250, with coarse and fine foams, biological sintered glass media and a good measure of polishing filter wool; given the debris I anticipated, the latter was vital.

A 300w heater provides the warmth, set to maintain the temperature at 29°C/84°F.

Sourcing the décor for a natural feeling tank is straightforward, if a little costly. Substrate simply consists of aquarium-grade silver sand of which I used roughly 40kg.

To recreate the effect of sunken wood and branches, I used three extra large pieces of Sumatran driftwood supplied by Unipac Pet Products. Finding big chunks like mine can be a task if your stores are reluctant to carry large wood, but any retailer that uses Unipac will be able to order them in. Giant wood comes at a price, and paying £70 or more for a large, prize piece is not unheard of. For the effect, it’s worth it.

The other potential expense — or potential free bonanza — is leaf litter. Fortunately, I’d amassed leaves of different types and sizes over the last year, and the discus tank provided the opportunity for me to put them all to use.

Once filled and with wood positioned, I unleashed a whole autumn’s worth of leaves, including but not limited to Oak, Catappa, Banana, Bamboo, 'Coco', Guava and Mulberry. I even tossed in a handful of Palmae pods from Pollywog.co.uk for good measure.

My concern, and rightly prophesised, was that with such deep bedding of leaves I would run into a deficit of oxygen and increased anaerobic bacteria developments. Within a week of setting up, I had some telltale patches of black sand that needed raking through with fingertips.

Tracking the slow flow, I added a single Koralia circulating pump as well as a Whisper airpump to rectify the problem. The airstone needed hiding in order not to ruin the illusion of nature, but it had the desired effect. After another week had gone by, no anaerobic patches presented themselves.

I avoided plants. True discus biotopes lack any underwater greenery, and at best support some floating plants. Heavily-planted aquascapes are attractive for the viewer but alien to the fish.

The crux of my layout involved set patches of light and dark. I worry when I see shy fish under uniform lighting, unable to move into any dark regions. For that reason I stripped away the standard T5 tubes and hood from the tank and rigged up a single Kessil A150w Amazon Sun on a gooseneck. The gooseneck was critical in order to get the slanted angle I craved. I wanted to emulate sunshine carving through an opening in overhead canopy. 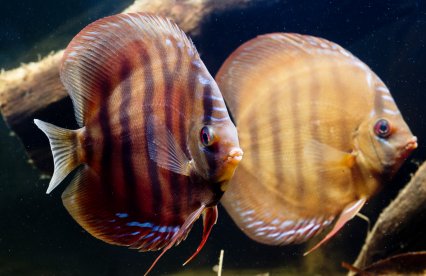 Being cichlids, discus are prone to hierarchical disputes and spawning can trigger aggression. Tank shape is an important consideration.

I’ve witnessed many bespoke discus tanks of ample volume, yet unusual proportions: stacked high, but with no length. For discus, depth is not of primary concern; a good side-to-side measure should be your first consideration, as it was mine.

There are three species, though their taxonomic history, and likely future, is rocked with disputes over correct ascriptions. All belong to the genus Symphysodon: Symphysodon aequifasciatus (or Green discus), Symphysodon discus (or Heckel discus) and Symphysodon haraldi, (Blue or Brown discus).Depending on who you speak to, aequifasciatus may alternatively be named tarzoo.

How to achieve discus tank success in six easy steps: 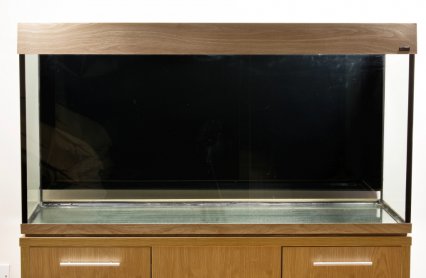 1. The tank is cleaned, a backing sheet attached (which isn’t quite deep enough) and placed on a level floor. 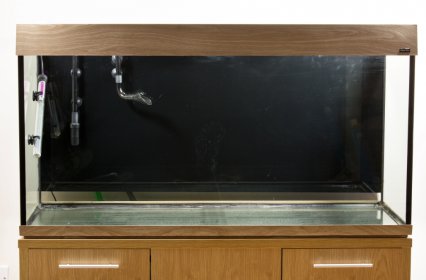 2. Filter outlet and inlet and heater are positioned but not turned on. Some filter media is rinsed and added to the canister. 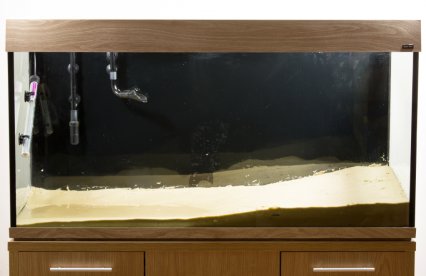 3. Aquarium silver sand is added and sculpted into the desired shape, hiding my backing sheet ‘window’ at the rear. 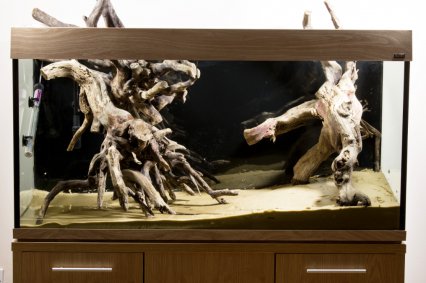 4. Sumatran driftwood is added spindly-sides down to create the illusion of roots and provide places for the discus to hide. 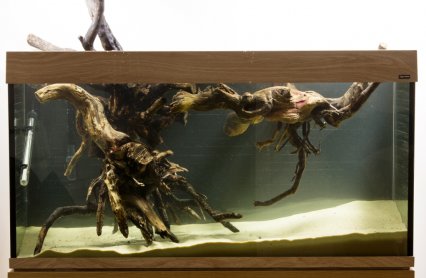 5. Tragedy! As the tank is filled, one piece of the unsoaked wood floats to the surface. A cobble is used to weight it back down. 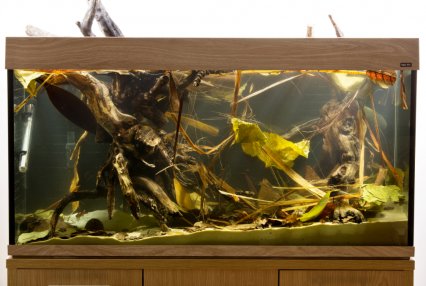 6. Pre-matured media is placed in the canister and heating and filtration is turned on. The leaves are added to soak and sink.

Stendker Discus are as robust as iron. As breeders, Stendker achieved something I thought physiologically impossible; they altered the tolerances of original discus strains into fish that can cope with wide ranging parameters.

Wild discus are found in a pH as low as 4.0, though typically somewhere around 6.0pH, and some of the softest conditions around — typically under 3°GH and KH.

Stendker discus are kept way higher than this. With their systems running an average 7.0pH, 8°KH and 15°GH, they are as at home in most people’s tapwater supplies as anywhere else. In a stroke, Stendker have overcome the greatest single difficulty with discus: their strict water requirements. Temperature still needs to be high, and the Stendker tolerance ranges are claimed to be 25-35°C/77°-95°F. Mine came from water at 29°C/84°F and that’s what they’ve stayed at.

Ammonia and nitrite can be problematic, especially as the fish are no longer in strictly acidic conditions. Above 7.0pH, ammonia becomes increasingly dangerous, and like any fish, discus will soon start to show gasping, flashing, excess mucus and ‘burns’ to the skin, gills and fins if exposed to it. Nitrite toxicity will cause gasping, bloody streaks in fins and skin and mucus. For discus, both of these parameters need to be at zero at all times, and tanks need careful cycling in advance.

Discus have small stomachs, but abyssal appetites. Overfeeding causes pollution issues, as meals are nibbled but rarely gorged. Underfeeding is the usual problem, with food offered just once a day.

Discus require several small meals over the course of the day, and uneaten scraps removed — hence the propensity for people to keep them in barren tanks. Three or four tiny feeds are suggested to retain weight, and once settled they will take a wide range of foods.

Stendker fish love bloodworm and beefheart. Beefheart has long been contentious, with many authors (myself included) previously citing excessive quantities of terrestrial fat as indigestible and leading to fatty deposits. When properly prepared, beefheart is an incredibly high protein, lean meat and these fish thrive on it. Be careful not to leave scraps unattended, as high protein means high amino acids, and amino acids result in ammonia! 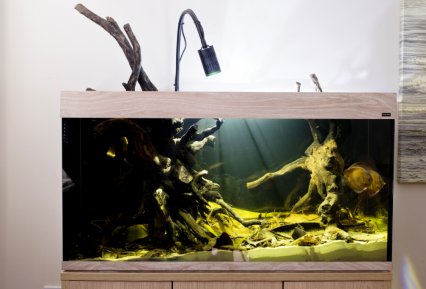 I’ll leave it to my audience to decide whether I managed to create something close to authentic. From the fish’s perspective, they bedded in within just one night and the following morning were happily dashing in and out of the light zones for mouthfuls of breakfast bloodworm and beefheart!

Huge thanks are extended to Mark Evenden of Devotedly Discus for supplying the fish. See his incredible stock at on the Devotedly Discus website, call 01323 483689 or visit Devotedly Discus, 32-34 High Street, Polegate, East Sussex, BN26 6AJ. Ring first to confirm that he’ll be there, as many visits are by appointment only.

Thanks also to Roy at Unipac Pet Products for supplying wood and substrate. For more information visit the Unipac website or call 01604 705600 to find a stockist. Please note that Unipac does not sell direct to the public.