Are all my fish at risk? A reader is puzzled about losing fish and is concerned about all of her tanks. Dr. Peter Burgess advises.

I had a beautiful Betta in a planted 50 l set-up with tetras and some shrimp. One of the tetras died, but I didn’t give it much thought as the water parameters were completely stable and I carry out regular weekly water changes. However, in August, my Betta became lethargic, with no external signs of anything wrong. I tried aquarium salt, Melafix and Pimafix, but he continued to deteriorate and died the following month after a short bout of dropsy. The only thing I noticed on close inspection was that his oral cavity and lips seemed somewhat swollen.

I put all the chemicals I could lay my hands on in the tank, and in November I put one of the Betta’s sons in there.

A few weeks later, he also started to go downhill, as did one of the other tetras, and both fish have since died.

I consulted a vet who gave us a strong antibacterial seven-day treatment, but ultimately it didn’t help.

I have just lost my third Betta — a female this time — in six months.

She had been unwell for a while with a lump on her lower abdomen and swelling that came and went. I had the presence of mind to open her up after her death and she was full of a clear, orangey fluid. Her organs were barely distinguishable and very mushy, but the liver was full of what looked like fatty lumps. I also punctured the lump that I thought had been a tumour, but the consistency was more like yellow, transparent jelly.

Now I’m getting worried about all my tanks and whether one of the other fish might have brought something in with it — the tetra with the bent back, or the danio that never grew, or the guppy that was really skinny. Are all my fish at risk? What should I do with the shrimp in the ex-Betta tanks? 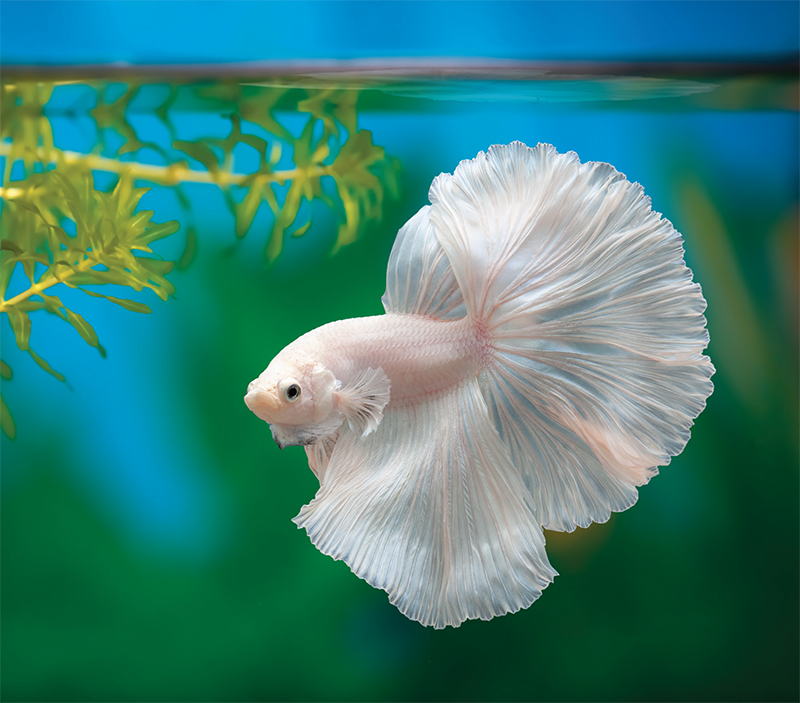 Peter replies: Regarding your post-mortem on the Betta, the mushy appearance of the internal organs and yellow deposits could be due to a number of conditions, including various bacterial infections. But be aware that the fish’s internal organs will naturally degenerate after death, so some of your findings might possibly be post-mortem changes, depending how soon you examined the fish after it died.

Yellow fat deposits associated with the liver could suggest steatitis, or ‘yellow fat disease’, which is due to food having become rancid. If so, then it would be pertinent to review the types of dry food that you feed and ensure you don’t exceed the use-by dates. Also, ensure that you store opened pots of dry food under cool, dry conditions.

The swelling on the Betta could be due to a bacterial infection (or possibly viral and maybe even certain internal parasites). I doubt whether it was due to a tumour as they tend to grow in size over time, and rarely get smaller of their own accord. It was certainly worth trying antibacterials/antibiotics on the assumption that bacteria might be to blame, although by the time you see serious symptoms such as bloating, it may be too late to save the fish with these drugs.

Mycobacterial diseases certainly will cause bloating and lumps, so I can’t rule them out. In very general terms, fish that are stressed or old are more susceptible to mycobacterial infections. These are extremely difficult to cure, even with a combination of antibiotics.

So, given we don’t have a clear-cut diagnosis, what can you do?

As always, review water parameters including water temperature. I’m sure you are keeping your Betta in heated set-ups, but many people rely on room heating alone, which can lead to stressful temperature fluctuations for the Betta. Obviously, we must always consider aquarium hygiene, as poor hygiene is a surprisingly potent stressor that can make fish prone to infections. Consider food choice and storage, as discussed earlier.

Be selective where you buy fish.

I see a lot of Betta for sale, but many look in poor condition and some are held in tanks with absolutely no environmental enrichment, such as surface plants to hide among, and excessive water flow rates.

There is nothing to suggest that all the fish deaths you describe are due to a common underlying disease, so I don’t think you are dealing with an infection that’s going to spread through your tanks and stock. For example, the bent spine on your tetra could be due to a developmental/genetic disorder, or age-related issues such as degeneration of the bone or increased susceptibility to infections.

If you do see any more fish developing body swellings or mouth problems, then treat with an antibacterial remedy. Unfortunately, we have no routine treatments as yet for fish viruses, tumours or certain internal protozoa.

Since we cannot rule out mycobacteria, then there is always a tiny risk of it spreading to humans.

I’d always recommend not handling fish or tank water if you have cuts or other skin breaches on your hands and arms – wear detergent-free rubber gloves for protection.

As for the shrimps, I’d leave them in isolation for a week or two, after which I think it would be safe to mix them with fish. The shrimps are unlikely to be carrying bacterial or viral diseases that can pass to fish.