Nathan Hill encourages us to make compromises when it comes to 'region-specific' set-ups. Here he creates a South American pool with a lot of vision but basic ingredients.

Pure undistracted biotopes are amazing, but getting hold of exact plants, décor and livestock needed to make an authentic replication can be trickier than pulling teeth from a Great white.

I suggest a compromise. I think we can mimic environments ubiquitous to a country or continent, found the length and breadth of the land, and with such common features that the lay aquarist could not tell one locality from another.

With semi-careful planning we can utilise the myriad of fish that slightly overlap each other’s temperaments and water requirements, gradually building up an acceptable menu of goodies to excite our visual tastes.

Using these less than orthodox combinations, we can embrace more common and unusual species as we find them — but still create something of a region-specific aquarium with the effect of 'biotopeness' to it. Sort of…

We can end up with a tank that’s not as far flung as a community, with its multi-continent, multi-mood fish, but not as focused as an academic survey of a Peruvian stream with records of fish that pass by and lab analyses of leaves and soil for the perfect recreation.

Hundreds of these tanks are already about, some more carefully planned than others. Many erroneously call these set-ups biotopes. However, it’s unfair to call them communities in the traditional sense. I suggest a new amalgamation of words. Let’s call them ‘communitopes’. If it catches on I want royalties.

I last rigged up something like this in ’98 and loved it. However, I was in a state of flux regarding home life and eventually the tank was lost to one flat or another.

Then came the TMC Signature 60 x 45 x 30cm/24 x 18 x 12”. This wide but shallow tank, open topped and without visual impairment of hood or bracer bars, gives the exact template I need to make a dank, Amazonian pool.

What better way to shake off those damp, pre-springtime blues than to have a little piece of South America right here in the lounge?

I wanted a sultry, debris-strewn, slow moving or static bank of some shallow South American pool. Originally I had my heart set on a specific Peruvian region, with obscure Apistogramma and intensely-coloured pencilfish. This early idea was thwarted by a mixture of lack of availability for one and high price for the other.

I trawled near-endless online footage of explorations, dragged out journals by South American explorers and rummaged through my archive of books before settling on a game plan — and a combination so simple that anyone can do it.

I found my common theme; pools containing leaf litter and twigs, with, at best, only some surface vegetation.

I was worried about finding floating plants out of season, but a call to Joey Abrahams at Aquadip ensured a bag of prize Pistia was headed my way. Later I chanced upon some Amazon Frogbit in tubs. 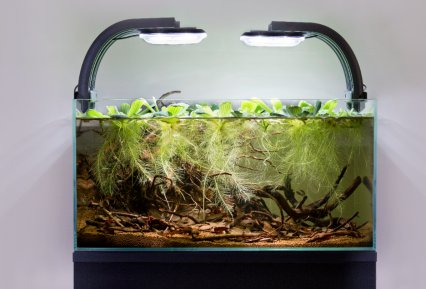 You can find habitats like this all over the South American continent. Pick a country, find the rainforest edge, machete your way in a straight line for a couple of days and you’ll likely find one, unless the jungle critters get you first. It’s a simple enough format for keeping a massive variety of characins, catfish, dwarf cichlids and more.

The ingredients of this tank were shockingly basic. All you need is some tangled wood, broken branches, leaf litter and soft substrate and you’re most of the way there. A handful of floating plants will complete the image.

Read on to see how I made my tank in just a few easy steps...

How I set up my South American pool communitope 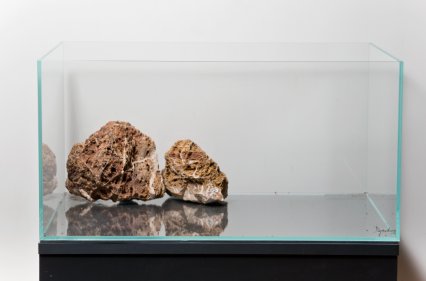 1. In order to build up my bank at the rear corner, J and K’s Maple leaf rock was used as a platform. This will help stop anaerobic patches from excessively deep substrate, as well as keep the bank shape. 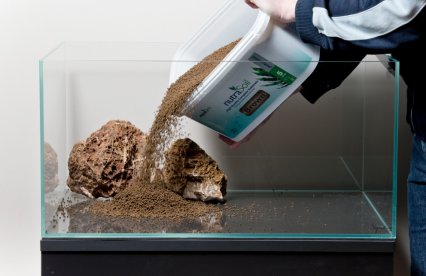 2. Around eight litres of TMC Nutrasoil was added, starting from the highest corner. Although silver or silica sand can be used, I liked the colour, texture and 'muddiness' of the TMC substrate more. 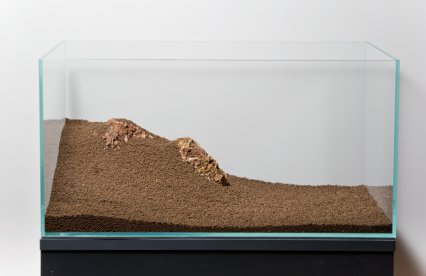 3. Using a credit card, the substrate was shaped and moulded. The intention was to create a shallow area where shoaling fish could congregate that wasn’t hidden away towards the rear of the tank. 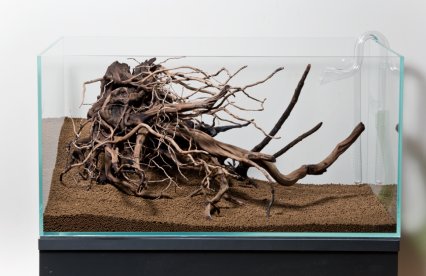 4. A large piece of Redmoor root from J&K was used as the main décor. The wood needs plenty of soaking time, but seems to leach much less tannin than other wood varieties I’ve used. 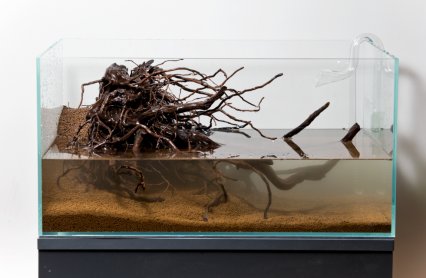 5. Filling the tank took time, due to the slightly dusty nature of the substrate. I rigged up the Fluval 306 and Aqua Essentials lily pipes that I’d had running on another established and heavily stocked tank. 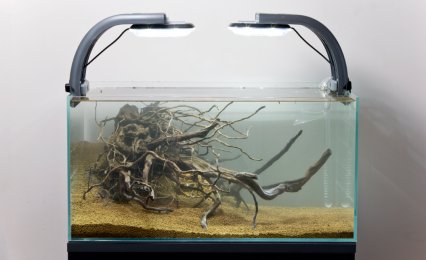 6. I wanted control over the TMC Mini 400 tiles and so instead of using the bracer bar on the MountaRay brackets, I used short stumps. Now I can move the lights backward or forward independently. 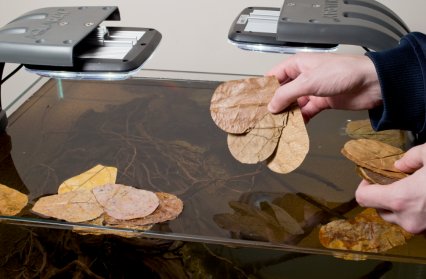 7. Catappa leaves require soaking for a day or two before they will sink. In the event, I shredded many for effect, and eventually added dozens of oak leaves to the 20 Catappa seen here. 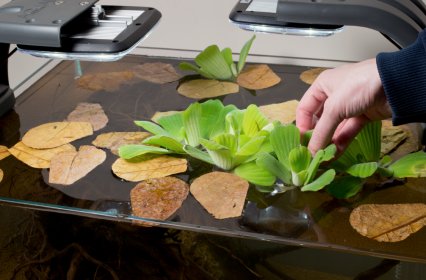 8. Finding floating plants out of season can be hard, but ask around and you’ll source them. In the event, these Pistia came direct from Aquadip and any retailer can get these to order on request.

Then came the fish…

I did something with my tank that I’d not recommend to newcomers to the hobby. I set it up a few days and then went out to find my fish. I’m sorry, but it happened.

I’d already laid out my criteria. I held on to my earlier desire for soft-water tetras, pencilfish, Apistogramma of some kind — as long as they weren’t one of the clearer, more neutral water species— and any sub-5cm/2” Corydoras. That’s a good ol’ fashioned 'communitope' type of selection in my book…

I had a cheating advantage on this tank regarding filtering. I have multiple tanks running and was able to keep my external filter media biologically sustained on one while waiting for leaves to settle and fish to be found.

Without this benefit I could have opted to take media from friends’ filters, or even ask my local store to help, as well as performing a fishless cycle. However, that would have taken a lot longer. Sometimes we cheats do prosper…

After a week allowing things to bed in and happy with my sunken leaves, I went on a shoptour. As soon as I reached The Nottingham Aquatic Centre, I knew I’d hit the mainline. It had superb tiny tetras, a selection of pencilfish as opposed to just one or two tanks, dinky cory cats of all varieties and a perfect Apistogramma substitute. 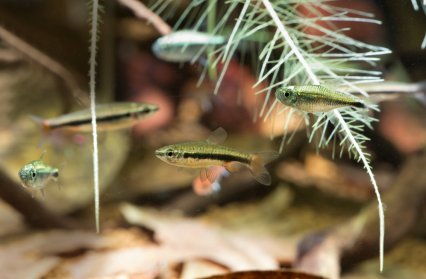 First, I opted for the pencilfish. The ones that caught my eye were a bycatch species. First impressions said they were Nannostomus marilynae, but having settled and coloured up, I’m now confident that they’re N. nitidus, or Shining pencilfish instead. Whichever species they are, they fit into the system nicely.

The idea was for them to roam among the higher parts of the tank, dipping in and out of the tangled roots of the floating plants. 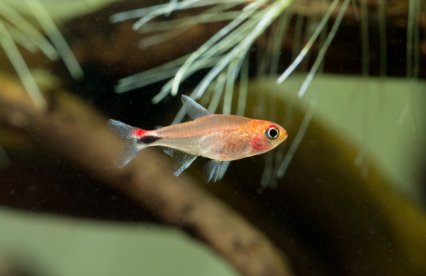 Next came five Ruby tetras (Axelrodia riesei) another unusual find, and not one you’ll see commonly, or in any numbers. I’d have had more but these were all that were available and I’ve seen none offered since.

Among the five was a real nugget. It was affected by a wild and unusually desirable kind of parasite and in its skin at some point had been a tiny trematode. 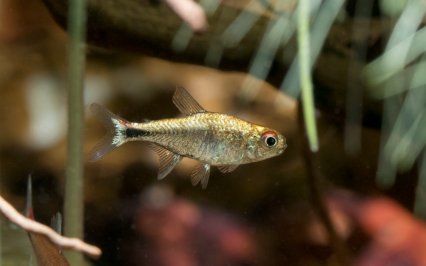 This caused the fish to deposit guanine in the outer layers, giving it an intense, bright golden sheen. 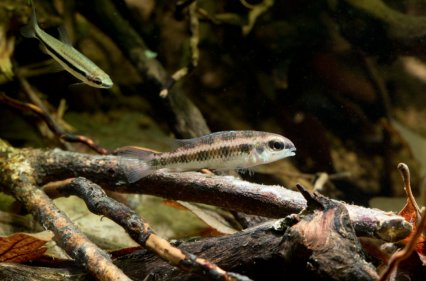 Policing the lower levels for food and making use of those tangles of wood and leaves came three Dicrossus filamentosus cichlids.

As much as I’d been holding out for some pleasing Apistogramma, the moment I saw these I was hooked. I bought what the shop had, hoping to form a pair from them, but even now their adult markings haven’t quite taken hold and their sex remains ambiguous.

I had some concern, as at a temperature of 26°C/79°F my tank is good for all the other fish but at the lower end of the spectrum for Dicrossus. I was ready to relocate them at the first hint of unhappiness, which didn’t happen. 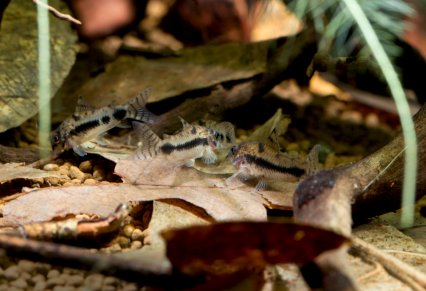 Sauntering across the base and lower levels, I found and fell in love with a brace of Salt and pepper catfish (Corydoras habrosus).  Reaching just 3.5cm/1.4” long, I was hoping they’d cluster as a shoal but they all hunkered down and got cosy, maybe through the abundance of leaf litter, and went off doing their own thing. They occasionally hook up briefly, but only in passing.

A week after the initial additions I felt there was still a gap. On a whimsical visit to the Waterzoo in Peterborough, I found just what I needed — ten Platinum tetra. These are not 'the' Platinums, (Hemigrammus vorderwinkleri), which are near unseen in the trade, but more silvery versions of the Gold tetra (H. rodwayi).

All the same, they filled the middle layer with just the extra sheen and movement I’d needed to bring the tank to life, and, just like that, I finished my communitope!

Tank: 60 x 45 x 30cm/24 x 18 x 12” TMC Optiwhite planted aquarium with black cabinet. I wanted this size because of the extra dimension front to back. The added width is apparent and welcome.

Lighting: Two Mini 400 Aquaray tiles, producing 6,500K which not only boost growth of floating plants — new sproutings are everywhere — but give a superb shafting effect through the leaves into the tank.

I opted not to use the MountaRay rail system as standard, instead placing a piece of rail into each bracket and using that to hold each light independently. This way I can move each one forward or backward for best effect.

How much did it all cost?

With a system like this I can avoid costly plant supplements and CO2 gear, yet still have the illusion of ample growth.

The floating plants grow invasively over the surface and need to be periodically hacked back — and I don’t need expensive aquascape scissors to do that.

Over time the leaf litter could prove costly if I buy it regularly, but I’m so happy with the dried oak leaves and know where to source them that I have a limitless supply for free. 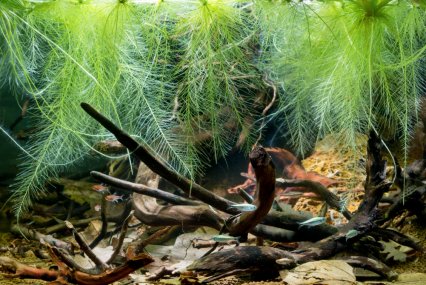 Get those leaves and twigs on show!

To get an authentic feel, I needed more than just a single root structure and open spaces.

Finishing the tank off with its debris-strewn effect required a mixture of old wood pieces, and plenty of leaf litter.

Rather than seek out new twigs, I turned brutal on some old Sumatra wood pieces I had from earlier projects.

Snapping these down into shards and scattering them around, I was able to achieve the wilderness image I craved.

After soaking some whole oak leaves and tearing up some Catappa into shreds, I simply let them lay where they fell.